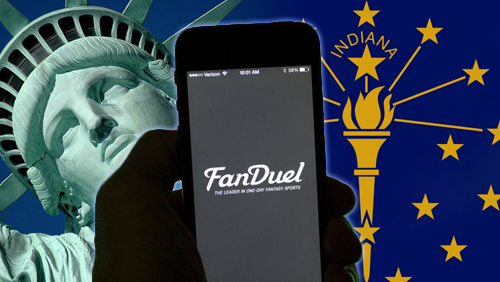 While New York and other states make efforts to scare off daily fantasy sports operators, Indiana is taking an entirely different stance.

“With the backlash they have received in their home state, we propose FanDuel move their headquarters to Indiana,” according to a press release from Indiana’s House of Representatives.

Morrison also confirmed with The Indianapolis Star that he is in talks with FanDuel regarding the possible move, which would likely result in a few hundred new jobs for Indiana residents, while Fanduel thanked the state lawmakers for “offering the DFS site a safe haven to provide jobs and stimulate a nascent industry.”

Morrison drafted a bill, House Bill 1074, that would allow fantasy sports at racinos. The measure was introduced last session but failed to gain any traction.

“In order to be prepared for daily fantasy sports sites in our state, we will each be introducing legislation calling for basic consumer protections and transparency, so consumers who use fantasy sports sites in Indiana are protected. By adding some industry-accepted consumer protections, we hope to give all participants the assurance of a fair game while participating in these sites. We believe that sports drafting is a game of skill and not of chance,” said Morrison in a statement.

“We want to ensure that Hoosiers throughout the state who enjoy this popular activity can continue to do so. These sites give Hoosiers the ability to compete in one-day events and not worry about keeping up with a season-long league. It is our goal this session to let the daily fantasy sports world know that it is welcome in Indiana.”

On New Year’s Eve, Schneiderman filed an amended lawsuit against DraftKings and FanDuel asking the daily fantasy sports companies to give back all the money they made in New York State.

On Monday, FanDuel and DraftKings filed appeals of Mendez’ ruling, arguing that their businesses would suffer greatly if they were forced to prevent customers from playing fantasy before the case worked its way through the appeals process.

“The Attorney General has still offered no evidence that supports a preliminary injunction,” said DraftKings counsel David Boies in a statement. “Daily fantasy sports contests are not gambling — their outcome is controlled by the knowledge and skill of DFS players –that’s how you win or lose.”