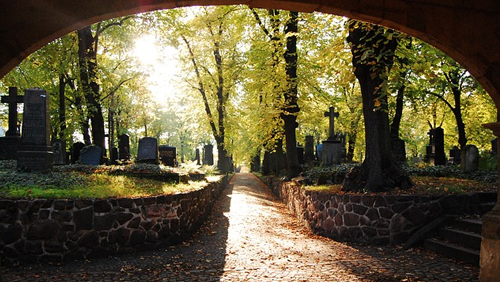 Lee Davy writes about a different game of Hold’em known as Tombstone Hold’em, a game that’s played in a graveyard.

Let’s face it, poker has a habit of being more horse and cart than Tesla Model S. The players come to play dressed like Middle Eastern women. Mouths are welded shut. Tongues are tied. The only excitement is when the waitress trips over the tumbleweed.

The creation of the Global Poker League (GPL) is designed to assuage most of our boredom. If stillness and sadness are the devils of poker, then Alexandre Dreyfus is God, and all Gods need a sacrifice. The man is going out on a limb; I hope nobody saws it off.

His mantra is ‘we will try, we will fail, we will fix.’

I have an innovative idea for him.

If the GPL fails, I have stumbled across another form of Hold’em that will keep people happy. It’s a form of Hold’em that’s taken the word innovative to a whole new level. Sure it has its foibles but Tombstone Hold’em could become the next big thing.

Tombstone Hold’em is the creation of the American game designer, author and gaming advocate Jane McGonigal. Her Ted Talk has received close to four million hits, and she even cured her severe case of concussion by turning the experience into a reality role playing game.

In her book Reality is Broken McGonigal talks about finding happiness hacks and dissolving them into reality-based gameplay. Tombstone Hold’em is one of these games. The rules are a little bit snafu but bear with me.

The cemetery is the gaming venue (McGonigal advises that you first seek permission). Playing cards are tombstones with pointy tombstones equalling spades, the ones with statues on top equal clubs, rounded tombstones are hearts, and flat tombstones are diamonds. To determine the face value of a card you take the last year of the date the person died, on the tomb you are using. If Fred Bloggs died in 1901, then the one equals an ace. If he died in 1905, then that equals a five. If there are no dates but two names on a stone then that’s a jack, three is a queen, and four is a king.

The game starts after five community cards (from a real deck) are placed faced down, and players (in teams of two), have to find a pair of tombstones to qualify has a hand. The only caveat is both team members must be able to touch their tombstone and another part of their teammates body to qualify as a hand. After both teams have a hand, they return to the community cards, flip them over and see who can make the best five-card Hold’em hand.

Why play poker in a cemetery?

According to McGonigal’s research on happiness, thinking about death is one of the most highly recommended happiness activities. What better place to think about death than in a cemetery? Best of all, cemetery owners welcome the games. Research shows that an average grave receives only two visits in a lifetime!

I’m not sure even the European Poker Tour (EPT) would have a Tombstone Hold’em side event.

But positioning the GPL’s Cube in graveyards around the world to increase happiness in the game?