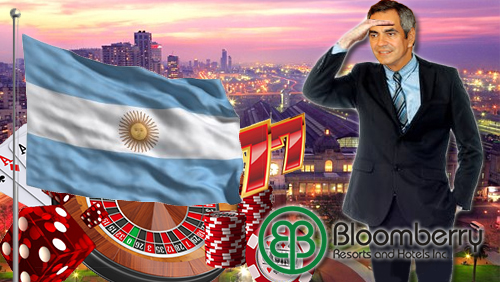 Enrique Razon’s Bloomberry Resorts has jumped all the way to Argentina for his second overseas casino venture.

In a Tuesday filing to the Philippine Stock Exchange, Solaire’s listed parent Bloomberry said that the company has established another subsidiary, Solaire de Argentina SA, and appointed the head of the country’s hotel association, Oscar Alberto Ghezzi of the Federacion Empresaria Hotelera Gastronomica de la Republica Argentina, as president of the venture.

Solaire de Argentina has built a website, www.solairedeargentina.com, even though the company has yet to secure the regulatory approvals for a hotel-casino site in an undisclosed area in the capital Buenos Aires.

Bloomberry Resorts “has a proposal to establish an integrated resort in Argentina, but it is still pending evaluation and action of government agencies and regulators in Argentina,” said the company.

Bloomberry has been looking overseas to expand its business. Last week, the company confirmed that it is set to reopen its casino in Korea under the new management of Jeju Sun Hotel & Casino this month—the firm’s first operating property overseas.

The casino operator also eyes Taiwan and Japan once it legalizes gambling.

Argentina is reputed to have more casinos than any other country in South America with 79 establishments and Buenos Aires with only two. In 2014, Argentina’s total gaming revenues is up 9.8% year-on-year to $3.2m compared to $2.9m from 2013.