Nevada is one step away from becoming the first US state to introduce arcade-style slot machines to casinos.

Back in May, Nevada Gov. Brian Sandoval signed a bill that would allow state casinos to host gaming devices that offered a skill-based component. On Thursday, the Nevada Gaming Control Board approved language spelling out the parameters of how those components can be integrated into the machines.

The approved language still needs the official okay from the Nevada Gaming Commission, which is set to meet on Sept. 17. But the politicians want it, the casinos want it, the equipment makers want it, and – most importantly – the public wants it, so consider it a slam dunk.

Once that hurdle is cleared, technical standards will have to be finalized and the game submission process will commence, but Gamblit Gaming CEO Eric Meyerhofer told the Associated Press the new games could be on casino floors by early- or mid-2016.

The arcade-style slots plan to offer variable payouts, allowing players to try for a bigger payday if they think their skill level is up to the challenge. The machines are intended to appeal to a younger generation of gamblers who turn up their noses at traditional passive slots. Slots handle has fallen at a rate of 2.7% per year since its 2007 peak and the ranks of button-pushing blue-haired grannies continue to thin with each passing year.

Marcus Prater, executive director of the Association of Gaming Equipment Manufacturers, said that manufacturers now have the ability to incorporate games like Candy Crush into gaming devices. “But we’re looking at all of the platforms: arcade, Xbox and mobile.” Prater suggested manufacturers could even throw older gamblers a bone by releasing titles based on the arcade games of their youth, like Frogger. (Paging George Costanza!)

There’s little doubt that casinos are in for something of a makeover in the next few years. MGM Resorts CEO Jim Murren recently suggested that Las Vegas casino floors would shrink because gambling was no longer the main reason younger tourists were booking trips to the city.

The August issue of Vending Times imagined what the casino floor of the future would look like once the millennial generation becomes the dominant demographic. To our eyes, it looks like a Chuck E. Cheese for over-21s, but then, we’re dead old. (Click here for a larger version of the graphic.) 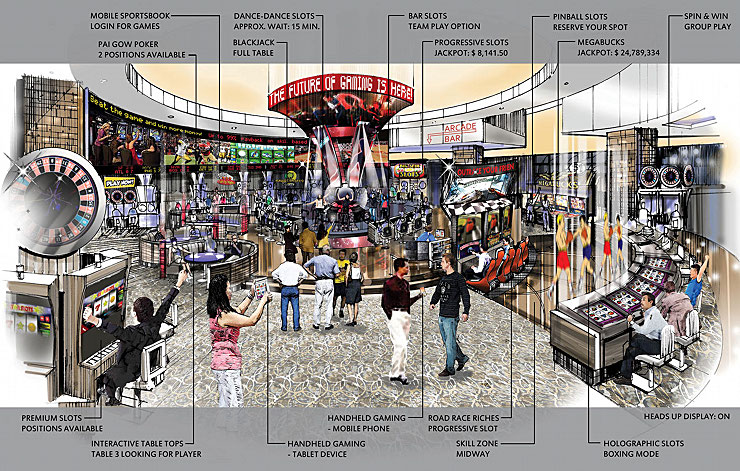