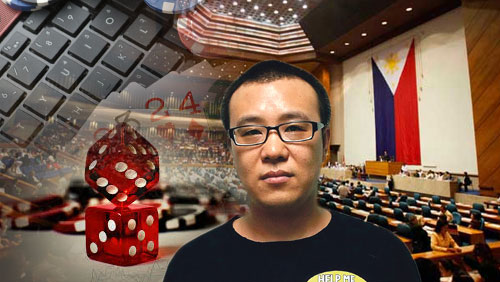 Bo Wang has left the Philippines, but not without ruffling the feathers of lawmakers in the country.

On Sunday, Party-list Rep. Jonathan Dela Cruz called for an inquiry into online gambling operations based in special economic zones such as Subic and Sta. Ana, Cagayan.

“Apart from the possible violation of immigration, investment and IT laws and regulations, these illegal gambling operators have also been allegedly engaged in massive tax evasion, gun running and other crimes,” Dela Cruz said in a statement.

The lawmaker filed HR 2255, calling for the House committee on Good Government and Public Accountability to investigate the operations that are “principally based in special economic zones and manned mainly by foreigners.”

Dela Cruz said a number of issues—such as possible violations of immigration, investment and taxation laws—came to light during the House deliberations on the alleged bribery and corruption activities involving Wang.

“One such issue involves the loose and oftentimes conflicting appreciation and implementation of immigration laws, tending to afford officials and personnel of the Bureau of Immigration and Deportation (BID) undue discretion, creating in the process an environment susceptible to pressure and corruption,” the lawmaker noted.

Dela Cruz also questioned how easy it was for companies that engage in so-called “new and improved information and communication technology systems” to register with the Securities and Exchange Commission, and consequently at the special economic zones.

“The easy and loose many by which these companies have been given ‘legal status’ to conduct their businesses has resulted in the spike in criminal activities including but not limited to money laundering, bribery and corruption of public officials,” he said.

Such operations, Dela Cruz said, have already caught the eyes of foreign governments and agencies, as was the case of Wang, who was recently deported to China.

The Chinese national was arrested by BID authorities last February at the Ninoy Aquino International Airport. Wang, who flew in from Malaysia, carried a cancelled passport and had been using Cagayan Economic Zone Authority (CEZA) visa to travel in and out of the country since 2009.

Chinese Embassy officials told the BID that Wang was wanted by the Chinese government and Interpol on charges of illegal gambling and money laundering. Documents submitted by the embassy showed Wang was a key player of the Manila-based Skybet network gambling company, who led a P91-billion crime syndicate in China.

According to a CalvinAyre.com source, however, Wang worked as a customer service agent for Dafabet before taking his role at Skybet, and that Wang was “likely just the front man for the operation and far from the top of this organization. The brains are probably back in China and Wang is just the patsy.”

Now Wang is already back in China, but his shenanigans in the Philippines could potentially lead to a new series of attacks against the local online gambling industry—an industry that provides well-paying jobs, skills training, and more importantly, tax revenues for the struggling local and national economies.

Here’s a suggestion: Why don’t online gambling companies in the Philippines create a lobby group—think American Gaming Association—that will help the community have its voice on the Congress floor. Because let’s be honest, how else can public officials make informed decisions on gambling-related legislations?