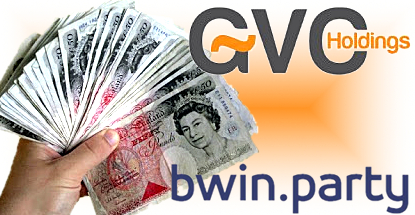 Stop us if you’ve heard this one before, but UK-listed online gambling operator GVC Holdings is upping its bid (again) to acquire rival Bwin.party digital entertainment.

On Wednesday, the Times reported that GVC and its Cerberus Capital Management backers were preparing to submit a new 130p per share offer for Bwin.party, for a total cash-and-shares consideration of around £1.1b. That’s nearly £100m more than GVC’s most recent bid earlier this month of £1.03b, which was itself marginally higher than GVC’s previous £1b bid.

The Times reported that Bwin.party’s board would meet Thursday to consider whether to accept GVC’s latest bid. The improved offer is still below the 140p per share price that Bwin.party board member Jason Ader suggested would be necessary for GVC to prevail, but who’s to say GVC can’t find another £100m or so under the sofa cushions if it looks hard enough.

Should Bwin.party’s board decide it likes the color of GVC’s money, the board is expected to allow rival bidder 888 Holdings – who believed they’d already sealed the deal with their £898m bid in July – a window of opportunity to make a counter-offer.

GVC had teamed with Canada’s Amaya Gaming on its original £900m bid, but Bwin.party’s board expressed concerns over Amaya’s existing debt load and GVC earning the majority of its revenue from grey- and black markets. GVC/Amaya also planned to carve up Bwin.party into Bwin.parts while 888 planned to maintain Bwin.party’s existing brands and spin off Bwin.party’s technology division into a standalone B2B entity.

Prior to the Times report, 888 COO Ital Frieberger had told eGaming Review that his company’s offer was superior to GVC’s because 888’s plan was “less about firing people and cutting costs and more about pushing the business forward.” GVC’s previous bid involved €135m in ‘cost synergies,’ roughly twice the cuts 888 plans to make should its bid prevail.

Frieberger believes 888’s ace in the hole is its ability to create “an operator with all four verticals powered by the same marketing platform.” Not sparing the hyperbole, Frieberger declared that an 888/Bwin.party deal “could become one of the most successful mergers of the industry.”

However, Frieberger warned that 888 wasn’t about to leverage their future in a mano y mano bidding war, saying that “at some point there is a line in the sand that you need to draw.” The coming days will reveal where 888’s line has been drawn.