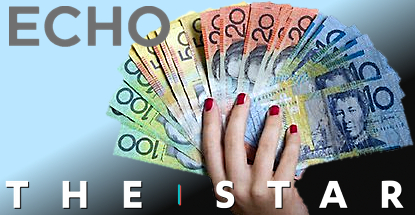 Australian casino operator Echo Entertainment’s fiscal year ended with a bang as an influx of high-rollers boosted profits by more than half.

Echo’s ‘international VIP rebate business’ aka Asian gambling whales was up a hefty 53% thanks to a 64% rise in customer front money to A$3.67b – a new company record. Total VIP turnover also set a record, rising 53.5% to A$46b. VIP win rate fell to 1.27% from 1.32% in the previous year – both figures are below the normalized rate of 1.43% – but bad debts fell to A$16m from A$41m as the company improved its credit risk management and collections performance.

Echo chairman John O’Neill called FY15 “a pleasing year” with “good results across the Group and progress made on all strategic priorities.” Fiscal 2016 started off on the right foot thanks to Echo beating out rival Crown Resorts for the new Brisbane casino license, although the bid process added A$11.7m to Echo’s FY15 expenses.

Among Echo’s FY16 priorities is continuing its five-year ‘masterplan’ to upgrade The Star in preparation for the arrival of the VIP-focused Crown Sydney in 2019. Echo plans to spend A$500m over the next five years gussying up The Star, including between A$150m-175m in FY16. Among the changes expected this year are the new Darling VIP gaming salons, the expansion of the main gaming floor and the Oasis gaming room as well as a refurbishment of the property’s buffet.

Last week, the Sydney Morning Herald reported that Echo had hired former NSW Liberal Party President Chris Downy to serve as The Star’s general manger for corporate affairs. Downy, the former NSW minister for sport and racing, most recently served as CEO of the Australian Wagering Council. Part of his job will include lobbying the government on gaming issues. Convenient, that.