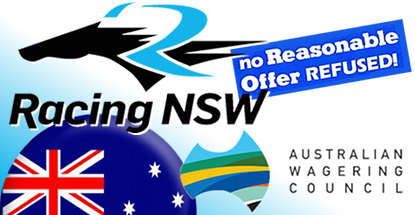 Australian bookmakers are up in arms over Racing New South Wales’ new rule on wagering minimums. This week saw Racing NSW announce new guidelines preventing corporate bookies from refusing to accept wagers from customers with whom they no longer wish to conduct business. As of September 1, corporate bookies with turnover of $5m or more will be required to accept wagers up to $2k per city meeting and $1k for meetings outside the city. Bookies with annual turnover below $5m are required to accept $1k wagers on all meetings.

Bookies will also be prevented from closing a customer’s account or from refusing to accept a new account if these actions are intended to skirt the new rules. Racing NSW will entertain complaints from any punter who feels he or she has been unfairly prevented from wagering with these bookies.

Not surprisingly, bookies are howling over this abrogation of what they feel is their right to decide with whom they do business. They’re also crying foul because the new restrictions do not apply to cash wagers placed at NSW TAB retail outlets because of what Racing NSW claims are difficulties associated with tracking these transactions. Wagers placed with the TAB via telephone or online will be subject to the new conditions.

Racing NSW CEO Peter V’landys claims that bookies were consulted before the rules were implemented. But Australian Wagering Council (AWC) CEO Chris Downy criticized Racing NSW for failing to address many of the concerns voiced by AWC members during these consultations.

Downy also wondered why the new policy was not implemented “through a well-developed proposal on the issue being presented to each of the state and Territory licensing authorities charged with the regulation of wagering service operators in Australia.” Unlike the TAB, most of the AWC’s membership – including Bet365, William Hill and Sportsbet – are licensed in the Northern Territory. Downy also expressed confusion as to why cash bets were exempt from the new guidelines. The AWC is reportedly weighing filing a complaint with the Office of Liquor, Gaming and Racing.

Mega-punter Steve Fletcher has applauded the new rules, telling the Herald Sun that his own betting turnover on NSW races could swell by $8m per year, around double what he’s presently wagering. Fletcher suggested the expected rise in Racing NSW turnover might encourage other states’ racing bodies to implement similar rules.