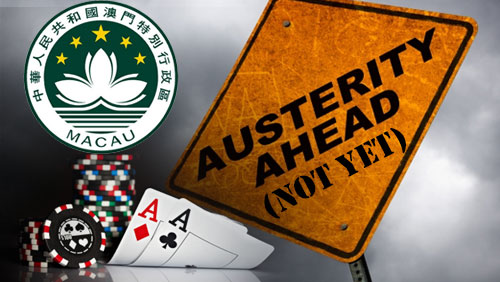 The Macau government will hold off on implementing austerity measures as the special administrative region’s gross gaming revenue (GGR) for July reached more than the government’s MOP18.35b target.

According to data released by Macau’s Gaming Inspection and Coordination Bureau or DICJ on Monday, Macau GGR fell 34.5% year-on-year to MOP18.62b ($2.33b) in July, the 14th consecutive monthly plunge.

“Since the average monthly GGR intake [for 2015] still continues above the MOP20b [$2.5b] threshold used to prepare the revised 2015 budget, at this moment it is still unnecessary to introduce austerity measures on public spending,” said the Secretary for Economy and Finance Lionel Leong Vai Tac.

Last week, Leong said it would be necessary for the government to conduct austerity measures, based on projections that July’s GGR would fall short of MOP18b ($2.25b). Although Macau has for the moment avoided tightening its belt, Leong said that the government would continue to “pay close attention” to GGR and would immediately introduce austerity measures if average monthly GGR drops below MOP20b.

Sterne Agee CRT analyst David Bain expects this trend to continue as the decline in revenue eases since February, when Macau posted 48.6% drop.

Casino operators are hoping that the opening of new gambling venues will attract more visitors to the city and result in a rise in gambling revenue.

Galaxy Entertainment launched two new gambling properties back in May. Melco Crown Entertainment is to open its $3.2b Studio City sometime this fall. Wynn Resorts’ Cotai Strip project is expected to open on March 2016 and Sands China’s Parisian is scheduled to have its official opening in the summer of 2016.

VIP customers that once accounted for the bulk of Macau’s gaming revenues have stayed away to avoid scrutiny leading to more junket operators shutting down their businesses.

Local junket AG Group announced that it will be suspending its operation in the Wynn Macau casino effective September 1. Aside from operating five tables at Wynn’s casino, AG Group also has five tables each in SJM Holdings’ L’Arc and Galaxy Macau.

Meanwhile, Entretenimento Sai Tai Wu Limitada, which operates VIP rooms in Melco Crown Entertainment’s Altira and Galaxy’s Starworld Casino, told its employees that it is suspending its external operation effective August 1. Further announcements will be made following the reconstruction of the company’s internal structure this month.