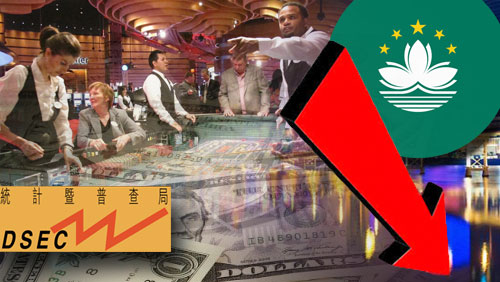 The number of Macau’s gaming and junket jobs dropped to 83,800 in the second quarter of 2015. Jobs in the gaming industry accounts for 20.6 percent of the city’s total labor force, which currently stands at 405,400.

The total number of gaming and junket jobs in Macau shrunk by 800 in the second quarter of 2015, the Statistics and Census Service (DSEC) reported.

Through its website, the bureau said employments in the gaming industry dropped to 83,800 in the April-June period from the previous period’s 84,600. According to Macau News, gaming and junket jobs accounted for 20.6 percent of the city’s total labor force, which currently stands at 405,400.

The city’s revenue decline, which celebrated its first grim anniversary in June, hasn’t been kind to junket operators, with 34 junket operators shutting down in the last year alone. Last month, junket operator Neptune Group reportedly planned to lay off more than 300 of its staff, and casino workers association Forefront of Macau Gaming (FMG) said some of its members were being pressured to resign.

Macau’s casino junkets, the licensed gaming operators who bring high rollers to the city’s gaming tables, are being squeezecasind by Beijing’s crackdown targeting corrupt public officials who gamble with public money as well as junket operators.

China’s President Xi Jinping even visited last December and warned the special administrative region to diversify its economy beyond casino gambling, which accounts for about 80 percent of its revenue. He also suggested tighter regulation and supervision measures for the city’s gambling industry.

Now, junkets are moving their businesses to other Asian countries. David Group, which shut three of its seven VIP rooms in Macau, has started taking its customers to countries with more relaxed visa approval process, particularly Vietnam, South Korea and the Philippines. Bloomberg reported the company also plans to enter the Australian and European markets next.

Jamie Soo and Adrian Chan, analysts at Hong Kong-based Daiwa Capital Markets, warned back in January that there will be “further room closures among larger junket operators this year.” They also noted that junkets—big or small—will continue to face tough trading conditions.

“We beg to differ with the common perception that the latest junket closures should weed out weaker players and spur healthy VIP segment consolidation, as: 1) we have not seen junket capital shifting from smaller to larger junkets, 2) surviving smaller junkets have adopted a cash-only model with low costs, little credit risk, and no incentive to consolidate, and 3) larger junkets still face a deteriorating climate and plan further cuts in VIP room numbers,” the analysts said in their research paper.