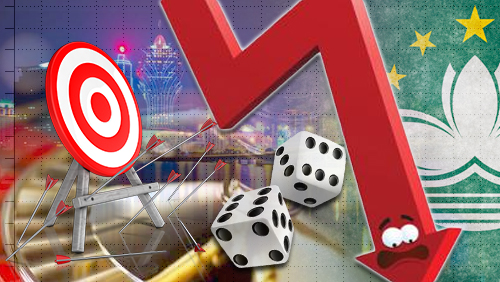 Macau is considering austerity measures amidst predictions that gaming revenues will not meet the government’s target for July.

The Macau Business Daily reported Secretary for Economy and Finance Lionel Leong expects the city’s gaming revenues will fall short of MOP18 billion ($2.25 billion) in July, saying “it will be necessary for us to conduct austerity measures.”

The government has set a target of MOP18.35 billion for July, but if it’s not met, Leong said he will have to meet with Chief Executive Fernando Chui Sai On and talk about tightening measures for August.

Leong said the city’s gaming revenues for July has always been MOP1 billion higher than June, but that pattern did not happen this year. Still, the finance secretary is positive that the summer vacations at the end of the month will encourage arrivals in the city.

It’s a glimmer of hope, but one that could possibly be dashed to the ground with China’s recent stock market crash. According to Street Insider, Deutsche Bank analyst Karen Tang said some junket agents have withdrawn deposits in Macau to cover margin calls for stock investments in China. She fears more small to mid-sized junkets will have to shut their doors later this year.

In addition, Tang said Macau has started to lose its luster. For the first time, the city has been pushed off the “Top 10 destinations for summer travel” list surveyed by Ctrip, a Chinese online travel agency. According to the South China Morning Post,the new top destinations include Thailand, Japan, Hong Kong, United States, Taiwan, Singapore, Indonesia, Italy, South Korea, and the Philippines.

Tang said Macau lacks new elements that will lure visitors from the countries that have weak currencies and relaxed visa applications.

Macau Chief Executive Chul previously expressed his optimism on the future of the city’s gambling industry. Despite the collapse in gaming revenue, Chul said there is still low unemployment rate, and the city is in a strong financial position with a number of large investments.

“Recently, the gaming industry, one of the economic pillars of Macau, has entered a period of adjustment and consolidation. The local economy is adjusting its speed, hence the concerns we have identified in society,” Chui said in a recorded speech in May.