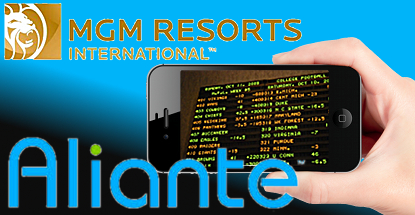 Casino operator MGM Resorts has confirmed that its new mobile sports betting product will be available to Nevada bettors this November.

The mobile push is part of a wholesale sportsbook technology upgrade courtesy of International Game Technology (IGT). While the app will be ready this November, MGM race and sports VP Jay Rood told Gaming Today that the new wagering system wouldn’t be in place until next summer. However, Rood said members of MGM’s M Life rewards program will be able to integrate their sports betting with a virtual wallet linked to all amenities on MGM properties.

Rood says the company is keen to educate visitors to Vegas that mobile betting is available to anyone who signs up at a local sportsbook, provided they’re within Nevada’s borders when they make their wager. Rood said he’d like to have people ‘handing out cards with our phone wagering information as guests enter any of our three arenas and then have a kiosk right near where they can sign up and deposit money into their account.”

The Aliante Casino in North Las Vegas recently launched its own mobile betting app. The product, which is powered by Miomni Gaming, is available for both Android and iPhone devices. While the app works anywhere in the state, accounts can only opened in person at the Aliante Sports Book, and deposits and withdrawals are also in-person only. Miomni’s technology also powers the mobile betting apps offered by Boyd Gaming and the Atlantis Casino.

The sports betting tally is expected to grow even faster now that the state has approved its so-called ‘entity’ betting legislation, which allows out-of-state bettors to take advantage (albeit indirectly) of Nevada’s legal status as the only state in the union that allows single-game sports wagering.