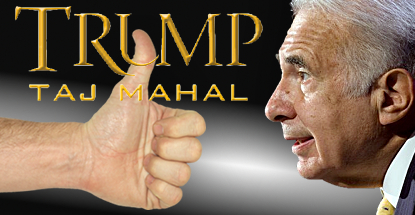 On Wednesday, the state Casino Control Commission approved Icahn’s plan to rescue the Taj Mahal from bankruptcy court. Icahn, who held $292m of the property’s debt, reached a deal with Taj creditors in February that gave him control of the company. Having already thrown the Taj a $20m lifeline in December, Icahn has promised to spend a lot more whipping the Taj back into shape.

Icahn also controls the Tropicana Casino, giving him one-quarter of AC’s downsized market. But the Taj ranks near the bottom in terms of revenue generation. Trump Entertainment CEO Robert Griffin told the Associated Press that the property could use a $40m makeover, if only to counter the perception that the Taj was living on borrowed time

The Taj still needs to resolve its longstanding dispute with its unionized workers, who are understandably still a bit miffed about the scrapping of their beloved pension and benefit schemes. A federal appeals court is currently weighing whether to restore the benefit plans, leaving the Taj still officially mired in the Chapter 11 file.

Icahn has threatened to walk away from the Taj if the union wins its appeal. On Tuesday, Icahn released an open letter to the Taj’s unionized employees, calling UNITE-HERE Local 54 “a driving force behind a dysfunctional system that enriches those in power to the detriment of its own members.”

Icahn said the union’s NRF pension fund was only 60% funded, making it “akin to a ponzi scheme” that had been “managed so poorly that it will likely have to be abandoned.” Icahn said the Tropicana had stopped contributing to “the black hole that is the NRF pension fund” and was instead “accruing contributions that will be safe and secure for the future of its employees.”

Icahn claimed to have launched his own investigation into whether “union leadership uses [workers] capital to enrich themselves.” Icahn warned that he was “working assiduously to uncover the truth concerning UNITEHERE’s leadership, who I believe are entrenched, self-dealing and dishonest.”

In reply, the union wrote its own letter, which was hand delivered – along with an apple pie – to Icahn’s New York City office. The letter is basically a list of things that are “not OK,” like being “stripped” of one’s health insurance and having one’s retirement security “ripped away.” They’re also not down with Icahn’s plan to turn them into “the working poor” and believe Icahn shouldn’t “hide in your penthouse while you destroy peoples’ lives.” At least, not without pie.