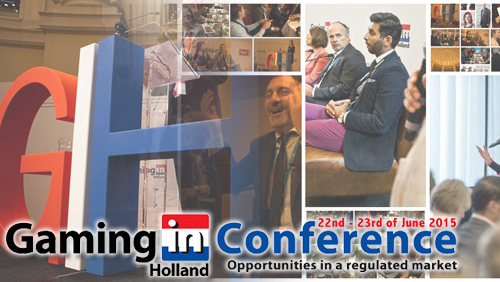 The fourth edition of the Gaming in Holland Conference is only two weeks away in Amsterdam on June 22nd-23rd.

The event promises to be the most exciting conference yet. Not only because regulation of online gaming in The Netherlands is drawing near, but also thanks to the world-class speaker line-up. More than thirty influential people from the international gaming industry will participate: among them CEOs of gaming operators, specialized lawyers, top SEO experts and lottery operators. The theme for this conference will be Opportunities in a regulated market. This year’s conference coincides with the iGamingSupershow of iGamingBusiness.

“‘Real money gaming and betting is not particularly part of the Dutch DNA. Associations with well-known and trusted household brands will help to open up this market,” commentedJurian Van der Meer – CCO at Endemol.

“The Dutch government has proposed a modernization of the lottery regulation from 2017. With the first outline reforms being made public in June, shall further fuel the debate at the Gaming in Holland conference. With ongoing talks of mergers and consolidation, lottery newcomers such as ZEAL/Lottovate (fka Tipp24), Camelot, Neolotto, KKCG and Winner Takes All, can enhance the discussion at the Amsterdam event,” said Willem van Oort founder of Gaming in Holland. ““This is a must attend session for our opening program of the conference on Monday 22nd June. We provide attendees of all levels, the platform in which to exchange information, network and operate a compliant gaming business in one of the fastest growing European regulated gaming markets – Holland.”