Home / Business / Who is to blame for Gambling? 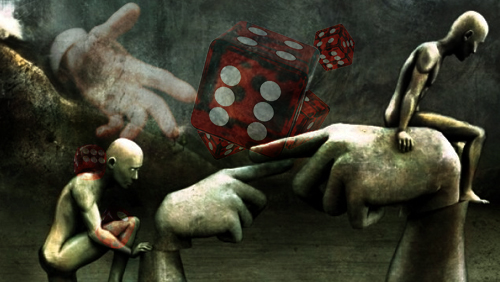 This is a guest contribution by Rick Slot, Marketing Director of Slotozilla.com. If you would like to submit a contribution please contact Bill Beatty for submission details. Thank you.

has been around since the first human being chose to swim across the river and get that berry bush, instead of finding one on their side of the bank. Every day, on every side of our lives we make a bet on an outcome. People often lie to themselves making claims like “I don’t gamble”. We all do. Some more calculated, some impulsive, other just for the thrill. Kissing a girl for the first time is the biggest bet out there…especially if it’s another girl. Some of the most successful and most morally praised companies were built on making high-risk decisions and gambling with everything. But why then, artificially created gambling is being given blame for all the world’s problems when it’s merely a part of our human nature?

Somehow, this is being overlooked when certain groups or individuals put a label on gambling as an evil concept and put tremendous effort into soiling the concept with blame. Casinos that offer visitors a decision to take high-risk chance and potential to benefit from it are evil. Why? To the best of our knowledge, any visitor is offered a list of guidelines, rules and specifications to which they agree before engaging in gambling. This knowledge is kept public and none of it is hidden. Covered – yes, heavily worded – definitely, but seldom – hidden. Individuals are free to ask and leave at the slightest chance of misleading information. Any person wishing to engage in gambling has a rich choice of casinos, games and rules within to choose from. At first we refuse to put effort into learning in-depth and then we blame those who offered us a seemingly easy chance of increasing our material worth.

At the beginning of 20th century there was a group of people who cared very little about putting effort into anything. They wanted better life but never cared to understand that not working for it wasn’t an option. So, when this group realized that they had many supporters (There will always be lazier and more wicked people) they began blaming others, who had what they wanted but did not wish to share what was built over the centuries. This resulted in one of the bloodiest coups in world history with an entire royal family executed, thousands killed in the following civil war and hundreds of thousands more lives ruined in the 70+ years of Red Terror that followed. This was a single historical example of people unwilling to take the responsibility for their own inactions. How many millions of cases can be found identically structured but on the lesser scale?

Many call to be responsible for your actions but equally, one should be brought to responsibility for their inactions and their lack effort put into reading the contract or lack of will to not spend their kids’ college fund on slots with payback rate of 83%. For those unaware – this means that on average, your highest possibility of winning will be 83 cents on the dollar. The percentage varies depending on the slot machine.

There is hope for people. Every day someone new does something so purely good that it spreads across the social media into the world’s hearts. There is hope that at some point people will realize that the reason anything exists is because these people themselves show extreme interest in it, unless of course the example is “Mammoths”. For the species, extreme interest meant utter extinction.

Casinos are not the problem. Sure, the industry has higher than average rate of crooks operating these niches but it does not take away from the great people who are just there because they enjoy it, can control themselves and make a sincere attempt to help people. Example would be the girls from NoDepositForum who create a small in comparison, yet powerful atmosphere by providing members with casino bonuses, advocating wrong-doings on their behalf and even wishing them happy birthdays daily which all are completely optional. And yes, I’m sure they don’t do it for peanuts but the attitude separates them from others. It is simple that life is hard.

The elephant in the room is the medical condition classified as “gambling addiction”. It would not be just to claim it nonexistent or overlook it’s perils but there is an argument that gambling addicts are not the kind of folk that interests casinos as much as the high-rollers or those who can control their own spending.

Here is a hypothesis: gambling addicts are on a high-risk, straight line to bankruptcy and breakdowns. They are unstable and limited as an earning potential. Most of them are medium and below level income and thus in severe cases will run out of funds to throw at the casinos very quickly. Compare this group of people with strong-willed individuals of medium and above income who spend these same amounts in casino regularly, but then go earn more and consistently return as a solid income for any gambling establishment. Severe gambling addicts are rarely of interest to a respectable gambling establishment and can cause more harm than good. The blame, if such must be placed, is not on the providers of choice, but on those who were not able to educate and raise a child to understand “work” and be able to say “no”.  It is a tragedy and these people need help and support but burning down Caesar Palace won’t fix their problems. In fact, removing all planet’s casinos might not.

Who is to blame? Responsibility or lack thereof. Every day we have a choice of gambling, eating sugar, going to work, saying bold things or just being an ass. We are given a choice of playing online slots at Slotozilla or going for the real casino deal. There is nothing else to it. We often choose to go straight for what we think we want, without asking whether we need it.

This is merely another voice in the sea of opinions that can fall on deaf ears or venomous tongues. I urge you, if all else fails, to continue gambling with your lives like we all have done since the first river-crossing but do it with the understanding that for any actions or inactions in your life, there won’t be more responsible soul than you.

Rick Slot has been engaged in the online gaming environment for the last three years, which lead to his significant marketing contribution to Slotozilla.com.