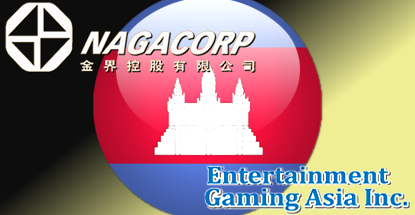 The deal, which was hinted at earlier this month, involves four independent third parties, who have already paid a combined $40m and will deposit a further $10m at a later date that will go toward purchasing the “brand new, latest state-of-the-art EGMs.”

The new EGMs will be jointly managed and operated by NagaCorp and the aforementioned four parties, but NagaCorp will reap 70% of the revenue. The contract is valid for 10 years and can be renewed on a mutual agreement basis.

NagaCorp plans to carve out a newly designed, refurbished area on NagaWorld’s gaming floor for the new machines. The area, which will be located near the property’s new main entrance, will form a “life-style casino cell concept” comprising live entertainment, fine dining, bars and “display areas.”

ENTERTAINMENT GAMING ASIA BACK IN BLACK
Increased VIP traffic at NagaWorld is being credited with helping Entertainment Gaming Asia Inc. (EGT) return to profitability after two years of losses. EGT, which operates a gaming venue in Cambodia and supplies casinos with gaming products, posted a profit of $570k in the first three months of 2015 compared to a $1m loss in the same period last year.

EGT supplies slot machines to NagaWorld and CEO Clarence Chung says growth in EGT’s gaming operations was “largely due to solid performance” at the casino. Overall revenue was up 76% to $8.3m, but this was largely due to EGT’s chip- and plaque-supply business, which more than quintupled to $4.3m after deals with Melco Crown Entertainment. Lawrence Ho’s Melco International Development holds a majority stake in EGT.

EGT’s gaming revenue was up a more modest 3% to $4m. Its Cambodian operations – which include not only NagaWorld but also EGT’s own Dreamworld Poipet slots hall on the border with Thailand – reported average daily win per unit up 9% while EGT’s Philippines-based slots business fell 4%.

Undaunted by last year’s closure of its ill-fated Dreamworld Pailin casino, Chung said EGT was “actively seeking new projects that would further our existing business lines and provide the opportunity to add new ones.” However, on Saturday, Forbes’ Muhammad Cohen reported sources telling him that EGT was looking to sell its Dreamworld Poipet property.