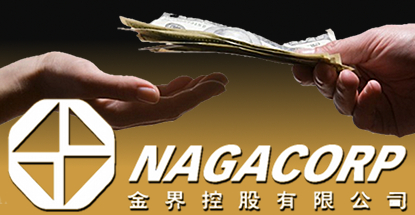 Cambodian casino operator NagaCorp says an investor has agreed to pay $40m just to enter into negotiations on opening a slots operation at the NagaWorld casino in Phnom Penh.

In a filing this week with the Hong Kong Stock Exchange, NagaCorp said CMC Phnom Penh Import Export Co Ltd had expressed interest in setting up an electronic gaming business in a designated area on NagaWorld’s ground floor for a prescribed period. In exchange for simply opening negotiations on this proposal, CMC has agreed to pay a non-refundable fee of $40m.

CMC is owned by “a group of independent Chinese businessmen” who were referred by China Central Asia Group, the company that built NagaWorld and is also serving as turnkey contractor for the Naga2 property being built in NagaWorld’s shadow.

Union Gaming Research said the space CMC was looking to occupy currently holds 300 slot machines operated by Best Merit, whose concession expires at the end of this year. CMC’s $40m negotiation fee would serve as the traditional upfront payment for such deals, with NagaCorp keeping about 70% of future revenue from the machines. Union Gaming suggested the deal could push NagaWorld’s slots revenue “materially higher,” given that CMC is likely to bring in newer machines than Best Merit’s, which are “among the oldest on the floor.”

NagaCorp said CMC’s interest was based on its confidence in Cambodia’s investment climate and the belief that tourist arrivals from China will swell thanks to China International Travel Services, the sales agent for the new Bassaka Air business that has leased two of NagaCorp’s A320 Airbuses.

In a thoroughly unnecessary statement, NagaCorp says its board is of the opinion that accepting CMC’s offer will be “beneficial” to the company. However, NagaCorp cautioned that there was “no certainty” that a deal with CMC would ultimately come to fruition and that the $40m fee might not be collectible.

Whether or not the payday materializes, analysts have forecast great things for NagaCorp’s future. NagaWorld’s VIP gaming turnover rose 79% in the first quarter of 2015 and Union Gaming expects the full year figure to be up 77% followed by a 22% rise in 2016.

Union Gaming says the property has “growth drivers as far as the eye can see,” including the VIP-focused Naga2, the NagaCity Walk shopping complex and the company’s in-development project in Vladivostok, which is expected to open in early 2018.