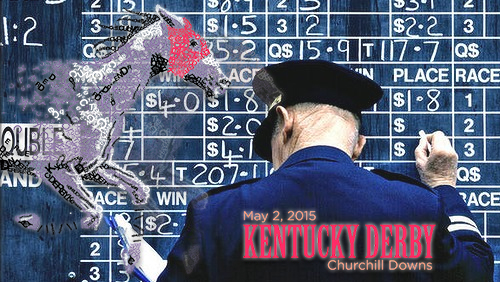 The first Saturday in May has traditionally been the second biggest day of the year for sportsbook signups. This year it’s doubly important as we’ll see the “fight of the century” and the biggest horseracing event of the year in the Kentucky Derby.

With all of the hype surrounding the boxing match between Floyd Mayweather and Manny Pacquiao the Run for the Roses has had to take a rare backseat in terms of media coverage.  Still this year’s event, like previous years, will be a boon for online sportsbooks acquisitions.

The postpositions drawn Wednesday, let’s look at where the derby contenders will run from and their current odds after the post draw.

Ocho Ocho Ocho, the son of 2007 Derby winner Street Sense, is a fine horse and was an early derby favorite but drew the rail position. Despite 12 horses winning from the rail, it’s been 29 years since Ferdinand won from the rail, hence the 50/1 odds for Ocho Ocho Ocho.

Carpe Diem is the first of four Derby horses trained by great Todd Pletcher, who trained 2010 winner Super Saver. With the best odds of Pletcher’s entries, Carpe Diem could truly seize the day this Saturday.

Materiality is another horse with great bloodlines having been sired by Afleet Alex, winner of two thirds of the Triple Crown in 2005. Materiality has yet to lose a race running a perfect three for three in 2015. At 14/1, Materiality is a solid pick from the third position.

Hailing from upstate New York, Tencendur is one of four horses currently with the longest odds at 50/1. Tencendur has just a single victory in just five starts so it would take a miracle run for a win here.

Danzig Moon is another 50/1 shot but won the postposition battle. Since 1900, 12 horses have won the derby with the 5th position.

Mubtaahij is a horse of the world, bred in Ireland, trained in South Africa and owned by a Dubai sheikh. Mubtaahij crushed the field at the United Arab Emirates Derby in March but looking at the Beyer Speed Figures, his 97 isn’t nearly enough to beat the field this Saturday.

Three-time derby winning and legendary jockey Calvin Borel is riding El Kabeir. El Kabeir will need Borel’s legendary ability to fight through the 20-horse field if he has a chance of overcoming the 33/1 odds.

Dortmund comes into Saturday as the horse with the second best odds to win the race. He avoided a poor postposition drawing the 8. Dortmund is a giant horse and should bully his way through the pack to be there when the race is decided.

Bolo isn’t expected to win with 33/1 odds. Trainer Carla Gaines has already admitted her horse is better suited to run on turf rather than the dirt at Churchill Downs.

Firing Line won by 14-lengths at the Sunland Derby but lost to Dortmund in two previous races. Jockey Gary Stevens is 52, just two years younger than the oldest Derby winning jockey Willie Shoemaker who road the aforementioned Ferdinand to victory at age 54.

Stanford is another Pletcher horse but at 40/1 isn’t expected to be in the running when they come to the wire but Stanford is a fast horse and could make some noise. I just wouldn’t bet the farm.

The fight of the century is even news at the derby, 33/1 Itsaknockout has signed a sponsorship deal with the Mayweather-Pacquiao promotions for the race. If the fight sponsored horse wins, I can hear Don King screaming, “Only in America!”

Keen Ice has only one victory in seven starts but it came at Churchill Downs. If Keen Ice stands a chance, it’s his late kick ability, which will serve him well when they come down the stretch.

Frosted comes in at 16/1 and is a real threat to win. The start of his career was a rough one as he stopped mid-race at the Fountain of Youth. His trainer Kiaran McLaughlin moved the horse from Florida back to New York, adjusted his blinkers and most importantly switched jockeys. Frosted will be ridden by Joel Rosario who guided Orb to victory at the 2013 Derby.

War Story has been consistent leading into the race, finishing in the money in all three prep races. I don’t see War Story overcoming the 50/1 odds to win but could be worthy of a few bucks on a place or show bet.

Legendary trainer D. Wayne Lukas looks to add to his 13 Triple Crown victories this Saturday with Mr. Z. At age 79, Lukas doesn’t have many more opportunities left. Like Jack Nicklaus and Arnold Palmer teeing off at the Masters, it’s nice to see Lukas still involved in horseracing, even though his best days are behind him.

American Pharoah is trainer Bob Baffert’s second horse in the Derby. At 11/4, American Pharoah slightly edges Dortmund as the favorite to win the Kentucky Derby. The horse has a four race win streak coming into Saturday and is clearly the horse to beat.

Upstart looks to make history by becoming only the second, joining Funnycide, as the only New York bred horses to win the Derby. Upstart is a dangerous horse having won his first two professional races and never finishing lower than third. Upstart will have to make history as no horse since 1900 has ever won the Derby from the 19th postposition.

Rounding out the field is the aptly named Far Right who will start in the 20th postposition.  Far Right is turning out to be a rags-to-riches story; first sold for $2,500 the horse has $625,766 in career earnings.

Who do you like to win the 2015 Kentucky Derby? Let us know in the comments below.