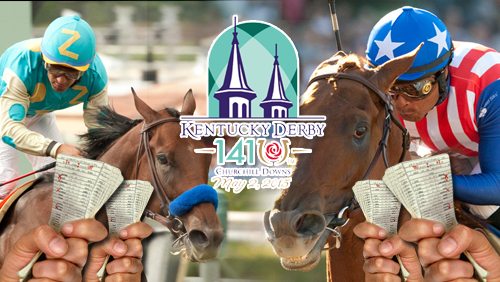 The Kentucky Derby will be in less than two weeks, making it the perfect time to roll out the betting odds of the year’s biggest horse racing event.

Front-runners American Pharoah and Dortmund have been tabbed as the front runners, well ahead of the rest of the field. As it stands now, Dortmund is the short favorite at 9/2 odds, followed closely by American Pharoah at a tidy 2/1. Outside of these two Bob Baffert-trained thoroughbreds, the field is made up of Carpe Diem (6/1), Mubtaahji (9/1), Materiality (9/1), Firing Lane (14/1), Upstart (16/1), and International Star (16/1).

The current trend isn’t looking particularly good for horses outside of American Pharoah and Dortmund because both have looked completely dominant in their lead-up races ahead of the Derby. American Pharoah, in particular, is riding a wave of momentum after dominating the Arkansas Derby. With the Kentucky Derby still 10 days away, it wouldn’t at all be surprising if American Pharoah clears Dortmund to become the favorite.

That’s how much of a two-horse race this Derby is being looked at. But just because that’s the popular sentiment, that doesn’t mean it’s going to turn out that way. Too many times we’ve seen favorites falter at this event, usurped by an upstart that just had the race of her life.

The second-tier contenders all have enticing odds but it’s the bottom-rung of contenders that could prove to have the most value.

Take Itsaknockout for example. At 25/1, you’re getting a live underdog with a horse that won his first three races of the year before finishing fourth at the Florida Derby last month, sending his odds tumbling down to this number. Maybe that Florida Derby performance was a fluke, maybe it wasn’t. But at 25/1, paying a small amount to find out could prove to be enticing.

Other long shots like Far Right (33/1) provide a wealth of experience and high-stakes racing. He also finished second to American Pharoah at the Arkansas Derby, possibly providing a glimpse of what’s to come at the Kentucky Derby next weekend. Then you have Danzig Moon (33/1), Tencedur (33/1), and Mr. Z (50/1).

It’s harder to make a case for these three horses given their past experience racing against some of the other horses in this field. But still, pay close attention to Mr. Z. He might be worth a flier at his current number.

All things considered, though, betting action on the Kentucky Derby should still favor Dortmund and American Pharoah. You can make a bet on both horses as early as now, but if you really want to see how the action goes from here until race day, you could still get some nice odds as the days wind down to the start of the Derby.