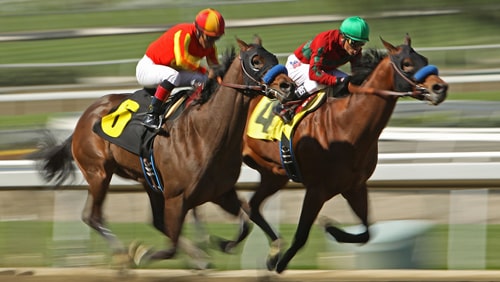 The Kentucky Derby is traditionally held the first Saturday in May – except for its June appearance in 1945 because of World War II – and is, by far, the biggest horseracing event in the world. The competition was seen for the first time in 1875 when Aristides took the first-ever title, and the Run for the Roses has continued to remain highly popular ever since. The current situation caused by the coronavirus has forced all sporting activity to have their schedules changed, and the Kentucky Derby was no exception. It is now tentatively planned for September, but those who don’t want to forego their May horseracing action will still have something to look forward to. A virtual Kentucky Derby will be held tomorrow, and Bodog has made sure it has the lines up for gambling fans.

The Kentucky Derby: Triple Crown Showdown will be on NBC tomorrow from 3:00 to 6:00 PM Eastern Daylight Time. Run in conjunction with Inspired Entertainment, it features a virtual race of the 13 Triple Crown winners from the past century. NBC also has a special show it will air in conjunction with the race, American Pharoah’s Run to the Triple Crown, a documentary on the horse’s Derby win from 2015.

There have been plenty of high-profile horses to take the Crown over the years, but none stands out like Secretariat. The thoroughbred set records at all three races of the Triple Crown in 1973 and still holds the record for the Churchill Downs 1 ¼-mile race, as well as the record for the 1 ½-mile dirt race at Belmont. Secretariat would go on to become an iconic name in the U.S., finding his name on a postage stamp, over 200 streets, his own festival and a movie. ESPN has him listed as the 35th top North American athlete of the 20th century.

Tomorrow’s Triple Crown Showdown is described as a “computer-simulated version of a race at Churchill Downs Racetrack” by Inspired. The gaming company adds, “Historical information about these horses and their racing records has been utilized in the software, which helps to determine the probability of their potential finishing positions. This probability is based on their past form and performance in other races.”

Based on Secretariat’s dominating performance, Bodog puts its odds at +225 to win. The online sportsbook gives Citation the next-best odds, at +500, stemming from his performance in 1948. He was the first horse to win more than $1 million in race earnings and finished his short career in 1951 after picking up a total of 16 consecutive wins.