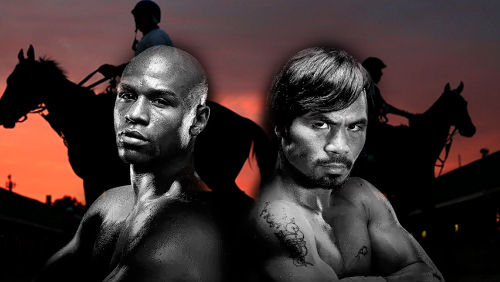 The Kentucky Derby is one of the most highly-anticipated sporting events of the year, and yet, it has found itself competing with the NBA and NHL playoffs, the MLB and MLS regular seasons, and oh yeah, that boxing fight happening in Las Vegas, Nevada.

Regardless of how excited we all are of the Floyd Mayweather Jr – Manny Pacquiao fight, it would behoove us to simply brush off the Kentucky Derby. That would be spitting in the face of one of the most important horse racing events in the world.

On the flip side, the fact that the Mayweather-Pacquiao fight and the Derby are happening on the same day could end up being the perfect combination of sporting events that sportsbooks could take advantage of. This early, there’s already been talk that a handful of oddsmakers are already lining up cross-sport props that could include a winner-and-winner bet on who wins the fight and who wins the Derby. These type of events rarely happen in the world of sports so take advantage of it while you can.

Should books go ahead and free light these type of prop bets, they’ll likely root for Floyd Mayweather to eke out a decision win over Manny Pacquiao and have American Pharaoh, the early betting favorite at the Derby, win the race. Having Pacquaio score a knockout in the early rounds and then seeing an early longshot like Ocho Ocho Ocho win the race at 40/1.

That’s only one of what could end up being hundreds of props being offered during the day. Some books might even sneak in NBA and NHL playoffs-related props into the mix. Everything really is on the table when you have a sports day like this one. Oddsmakers are already anticipating the day to generate the kind of betting handle that would mirror the Super Bowl.

However this plays out, May 2, 2015 will be a busy weekend for sports fans and bettors. Right now, it’s understandable to see the Mayweather-Pacquiao fight get all the spotlight now while the Derby is being relegated to the shadows. But as the race draws closer and closer, we should all give the latter its well-earned attention.

After all, the Kentucky Derby is still one of the most important sporting events in the US in any given year.