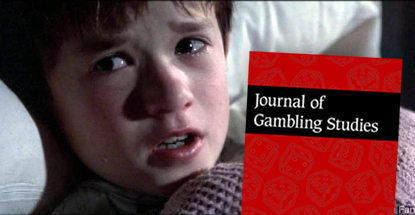 A new report published in the Journal of Gambling Studies examined the phenomenon of probability matching, i.e. the tendency to match response proportions to outcome probabilities when predicting repeated binary outcomes. This is more commonly referred to as the gambler’s fallacy, in which some gamblers believe that because a roulette wheel has landed on red the last nine times, the odds favor the ball landing on a black square on the next spin.

The study, conducted by Wolfgang Gaissmaier of the University of Konstanz in Germany and Andreas Wilke of Clarkson University in New York, involved a sample group of 161 individuals: 91 regular casino gamblers and 70 control subjects. The study identified 28.6% of the gambling group as pathological gamblers compared to just 2.9% among the control group.

The participants were shown two slot machines. One machine was programmed to generate a win two-thirds of the time; the other machine gave out winnings one-third of the time. These odds weren’t explained to the participants but could be easily gleaned from experience via feedback. Participants were asked to predict which machine was more likely to pay out on each spin. Over time, the gamblers were found to be more than twice as likely (31.9% v. 15.7%) to engage in probability matching.

Gamblers also fared poorly on the cognitive reflection task (CRT), which poses questions that seem to offer a quick solution but the real answer requires a little more thought. Sample question: “A bat and ball cost $1.10. The bat costs $1 more than the ball. How much does the ball cost?” The answer is 5¢, not 10¢ as many might blurt out.

Participants were asked three CRT questions, and the percentage of gamblers who got at least one question right was 18.7% compared to 47.1% among the control group. The study’s authors suggest this reflects pathological gamblers’ difficulty in controlling their impulsivity. The gamblers who scored lowest on the CRT testing also showed the highest rates of probability matching.

The study’s authors say there were no other variables that could account for the disparity between the gamblers and the control group. The authors concluded that “gamblers’ cognitive processes differ systematically from those of non-gamblers” and that gamblers were “more likely to perceive illusory patterns and reason more impulsively than non-gamblers.”

The study suggested that “perceiving illusory patterns in a random gambling task could be a default state that needs to be overridden or at least resisted with regard to betting, which habitual gamblers fail to do.” Problem gamblers appear to be “overly prone to accept random series of events as, in fact, nonrandom – and nonrandom enough to be worth betting on.”