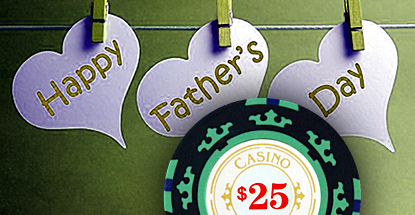 They fuck you up, your mum and dad.
They may not mean to, but they do.
They fill you with the faults they had
And add some extra, just for you.

The study by University of Iowa’s Carver College of Medicine involved 95 pathological gamblers and 91 control subjects matched for age, gender and education level, along with 1,075 first-degree relatives (parents, children, siblings). Using interviews and proxy interview material, the researchers found that 11% of the pathological gamblers’ relatives were similarly afflicted, compared to 1% of the control group.

The pathological gamblers were also more likely to have substance abuse issues, adding more weight to previous studies that showed problems gamblers had difficulty controlling their use of a host of substances and/or activities. Not for nothing has Dr. Patrick Basham described these individuals as people whose problems go well beyond gambling. The genetic component linking pathological gamblers goes a long way towards explaining why the number of problem gamblers has remained more or less constant across many different jurisdictions despite a dramatic expansion in the number and range of gambling options over the past couple decades.

Professor of psychiatry Donald W. Black said the results of his study – the largest of its kind – were “quite striking” in that it confirmed what up till now had been purely anecdotal reports of pathological gamblers sharing a gene pool. Black voiced hope that the results might provide “a better chance of finding genes that are linked to the gambling disorder, and maybe that would pave the way for improving our understanding of the genetic transmission in general for psychiatric disorders, particularly in the realm of addiction.”