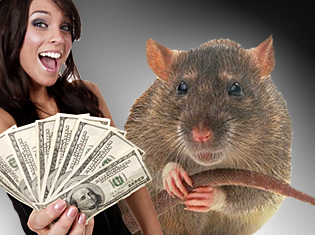 Problem gamblers have even more problems than you might realize. A Dutch study has determined that the brains of problem gamblers are hardwired to pursue easy money over easy women. Neuroscientists at the Radboud University Nijmegen put 18 male pathological gamblers and 20 healthy control individuals into an MRI machine (not at the same time) to measure their brain activity while performing one of two tasks.

The participants were asked to press a button as fast as they could in order to either win cash or view pictures of scantily clad women, with the speed of their response indicative of their desire to produce a result. The gamblers responded 4% faster when money was on the line compared to the chance to see some bodacious ta-tas. Neuroscientist Guillaume Sescousse, who led the study, said the difference “might seem small, but is actually highly significant.”

Previous studies of normal individuals indicated that sexual and financial stimuli produced different responses in different areas of another of the brain’s reward regions. The researchers believe this represents a distinction between inborn responses to survival-related rewards like food and sex vs. learned values like money and power. But the same reward centre of gamblers’ brains was only activated by the financial stimuli, suggesting that they placed a higher value on money than sex.

RATS, SLOTS, PELLETS, PROBLEMS
Help may be on the way for those unfortunate folks who can only get wood from winnings thanks to rats with serious gambling problems. University of British Columbia researchers built what was likely the world’s first rat casino – unless you count Atlantic City’s financially flailing Revel, where the rodents in the basement likely outnumber the bipeds on the casino floor – and some of the vermin quickly attained VIP status by gambling their rat asses off.

As published in the Biological Psychiatry journal, the ratsino involved a slot machine-style device featuring three flashing lights and two levers the 32 selected rats could manipulate with their plague-infested paws. If every light lit up following a ‘spin,’ pressing the ‘cash-out’ lever would cause the machine to dispense 10 sugar pellets. Seven other combinations of lights indicated a loss, and pressing the lever not only meant no pellets were issued but the rats were subjected to a 10-second ‘time out’ penalty. The second lever allowed rats to bypass the ‘time out’ but offered no chance of dispensing pellets.

The researchers found that the rats were prone to hitting the ‘cash out’ lever when only two of the three lights were illuminated, indicating a ‘near miss.’ Previous research in human problem gamblers has demonstrated a similar cognitive bias, suggesting their brains respond to near misses much as they do toward actual wins – with a flood of dopamine. The UBC researchers then gave their casino rats drugs that blocked their brains’ dopamine D4 receptors and the rats responded by reducing their tendency to hit the ‘cash out’ lever on non-winning spins.

The researchers stress the fact that rats aren’t humans, so the same effect may not be replicable in human slot jockeys. Previous studies have suggested treating problem gamblers – or as Dr. Patrick Basham refers to them, people with problems that go way beyond gambling – with the same drugs used to wean heroin addicts and alcoholics off their drugs of choice by blocking their pleasure receptors.