Exposed: the hidden link between gambling and peanuts 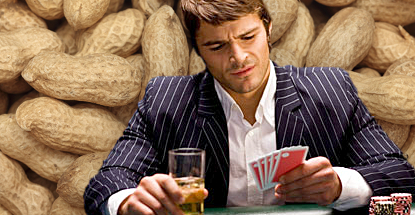 In August, researchers at the University of Macau’s Institute for Studies of Commercial Gaming (ISCG) reported that the prevalence rate for pathological gamblers in Macau had fallen between 2010 and 2013. Researchers say the post-2010 decline can be attributed to one word: adaptability.

Studies showed Macau’s pathological gambling prevalence rising from 1.8% in 2003 to 2.8% in 2010 before shrinking to 0.9% in 2013. The upward arc mirrors the end of Stanley Ho’s monopoly and the arrival of international casino operators on Macau’s shores.

According to ISCG director Davis Fong and University of Nevada, Las Vegas executive director Bo Bernhard, the prevalence decline indicates that Macau residents have gotten over casinos. Bernhard told the Macau Daily Times that “the first time you’re exposed to something, you tend to see an increase in use, but human beings are very adaptable and flexible, so we see problem gambling decline after it saw an increase.”

That said, Bernhard noted the new wave of big shiny mega-resorts set to open on Cotai over the next few years, which could reignite the curiosity factor. Bernhard said gambling support services had to be on guard in case the numbers creep upward again.

EUPHORIA IN SHORT SUPPLY
In Europe, a brand new study has reinforced the theory that pathological gamblers are born, not made. In findings presented over the weekend at the European College of Neuropsychopharmacology Congress in Berlin, UK researchers claimed the brains of pathological gamblers produce fewer endorphins than their non-gambling control subjects.

The study utilized Positron Emission Tomography (PET) to make three-dimensional images of the opioid receptors in the participants’ brains. Head researcher Dr. Inge Mick found that gamblers’ brains were found to have the same level of receptors as the control group but the gamblers displayed a “blunted change in endogenous opioids” to an amphetamine trigger. A followup questionnaire found the gamblers reporting they felt less euphoric than the control group.

The study adds to a mounting body of evidence suggesting a strong genetic component to pathological gambling. In June, the University of Iowa published a study showing relatives of pathological gamblers were eight times more likely than the relatives of non-gamblers to develop gambling problems of their own.

Other studies have demonstrated that people who struggle to control their gambling are often wrestling with multiple demons, including substance abuse, depression and anxiety disorders. The suggestion has been made that problem gamblers would be more accurately described as people with problems that go way beyond gambling.

GEORGE WASHINGTON CARVER’S FIENDISH REVENGE PLOT
Further evidence of a genetic predisposition comes from the fact that the prevalence of pathological gamblers has remained stable despite a significant expansion of gambling options over the past few decades. In fact, pathological gambling prevalence traditionally affects less than 1% of the population, or about the same amount of people who are allergic to peanuts. Despite the data, the media has depicted both groups of outliers as infinitely more prevalent than reality.

Critics of peanut allergy hype include Harvard Medical School Prof. Nicolas Christakis, who wrote in the British Medical Journal that there was “a gross overreaction to the magnitude of the threat.” Christakis said the societal responses to the peanut terror “bear many of the hallmarks of mass psychogenic illness, previously and quaintly known as ‘epidemic hysteria.’” Gambling – in particular the online kind – has been subject to the same irrational fears and responses, despite what the data has to say.

There are likely those who would cringe at the attempt to link peanuts with punting and who might argue that peanuts are a foodstuff and thus a more essential product than gambling. Yes, and while the overwhelming majority of the population has nothing to fear, peanuts are the leading cause of fatal food-related anaphylaxis. It’s conceivably possible that someone once choked to death after accidentally sucking instead of blowing on a pair of dice, but gambling on its own cannot kill anyone. So who’s the real bogey man here?

To be clear, no one’s suggesting getting rid of peanuts. For one thing, you’d have to claw the Peanut Butter M&Ms from our cold, dead – not chocolate covered, because they melt in your mouth – hands. But also because banning a product safely enjoyed by 99% of the population would be silly. Clearly label its presence, educate people about the risks and make sure programs are in place to deal with anyone who doesn’t yet understand that they have a problem. But don’t go nuts.