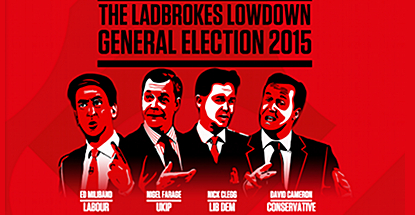 UK-listed bookmaker Ladbrokes is perhaps ruing the launch of a new General Election-focused microsite just as its new CEO was distancing the company from his predecessor’s public endorsement of the Tory party.

On Wednesday, the betting firm launched The Ladbrokes Lowdown – General Election 2015, which offers punters real-time updates on Lads’ betting odds in each of the UK’s electoral districts. The move follows Betfair’s launch last week of its interactive Betfair Predicts app, as companies vie for ever larger slices of the estimated £100m to be wagered on the outcome of the May 7 vote.

But Lads’ launch was overshadowed by a letter published by UK newspaper The Telegraph. The letter was signed by over 100 senior business figures expressing their support for Tory economic policies and warning that a Labour party win would “threaten jobs and deter investment” in the UK. Among the signatures on the letter is that of former Lads CEO Richard Glynn, whose last day on the job was March 31.

Since the letter’s publication, Lads new CEO Jim Mullen issued his own letter, which reminded The Telegraph that “I am the CEO of Ladbrokes and I want to make clear that our business is to take bets on the general election, not to tell people how to vote.”

Mullen went on to say that there were “many shades of political opinion” in Lads’ 15k-strong workforce, “never mind ex-employees or our customer base of millions of people. My vote is worth the same as theirs and their choice of vote is their business. So I won’t be signing any letters in this, or any other, general election, that seeks to tell people how to vote.”

The irony in Glynn warning of Labour posing a threat to the UK’s economic recovery is that his tenure at Ladbrokes’ helm resulted in a dramatic erosion of the company’s share price and market share. Yet Glynn reaped seven-figure bonuses and 85% pay rises during his time in office, plus a final £850k payday on his final day on the job. All of which, following Tory logic, makes Glynn a welfare-gobbling money-for-nothing social parasite worthy of an appearance on the next series of Benefits Street. Or, barring that, chancellor of the exchequer.