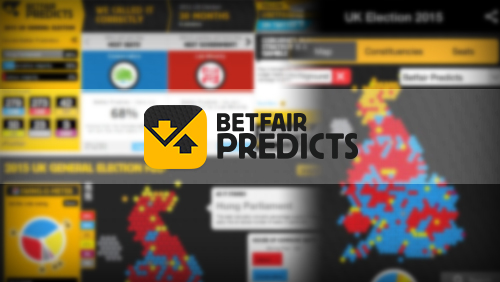 Betfair have today launched “Betfair Predicts”, an interactive app that aims to show how the Betfair Exchange is calling the General Election in real time.

Betfair’s Exchange has a track record of calling political outcomes correctly; most recently calling a “No” vote at the Scottish Referendum as an 80% chance throughout the campaign, while the polls were calling it 50/50.

Betfair Predicts, which is available across desktop, iOS and Android, takes the betting data within the Exchange’s markets and brings it to life in a simple and engaging way. Several rolling graphics show the percentage chance (drawn from the market odds) of each of the main election outcomes, with an interactive map showing the betting landscape right down into the individual constituencies.

Betting data is also constantly compared to the main polling agencies, making it a one stop shop for anyone with an interest in how the election will go.

Alex Deacon, Director of Innovation for Betfair commented: “As a company rooted in technology and innovation, we’re excited to bring our new political prediction app, Betfair Predicts, to anyone with an interest in understanding how the General Election will unfold. Betfair has always offered a transparent way of tracking the outcome of political events, but this app brings these predictions to life in an engaging and simple way.”

James Midmer, political spokesperson for Betfair said: “This is the tightest election for years and people will want as much insight as they can get. Betting markets have an impressive track record of predicting outcomes and Betfair is offering its most comprehensive range of markets ever for those looking to get involved.”

Grand Parade, agency who built the app said: “We have worked with Betfair on political prediction products since 2009, and the new Betfair Predicts app takes this work to a much higher level. Betfair is always ahead of the polls but the incredible granularity in this app, the speed of dynamic data updates and its six-way user definable swing-o-meter make it a power tool for anyone interested in predicting the outcome.”