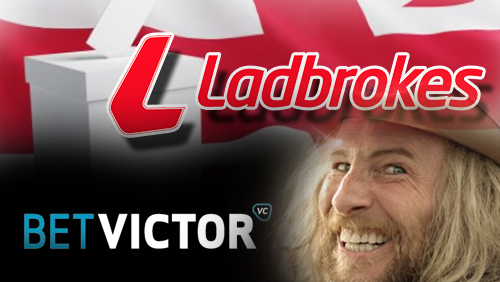 Election prop betting isn’t as big as its sports counterpart, but bookmaker Ladbrokes expects the forthcoming UK elections to be the biggest betting election in history. The company’s head of political betting, Matthew Shaddick, believes bettors are going to spend in excess of £100 million in this election.

That sum would represent a quantum leap from the amount of money bookmakers took in during the last election in 2010. “We are pretty sure it’s going to be the biggest betting election, probably two or three times as big as we saw in 2010,” Shaddick said.

Certain constituencies in the UK are tipped to be more active in betting, specifically the seat in Kent where candidates Nigel Farage and Al Murray are locked in a heated battle.

Meanwhile, BetVictor is bringing back an old friend to star in its new TV campaign to boost its non-football bet offering. The firm’s betting mascot, Maurice, has been tasked to headline three TV adverts created by creative agency VCCP.

“Our Maurice character has quickly become one of the most instantly recognizable advert stars on TV today and Maurice in the hot seat provides us with a platform to communicate to the wider betting audience, across the many sports set to dominate the British spring and summer,” BetVictor Chief Marketing Officer Anton Bell said in a statement.

The adverts will focus on horse racing, tennis, and cricket. The first ad, called Jockey, was launched earlier this week to help promote BetVictor’s horse racing offerings as the countdown to the annual Cheltenham Festival begins.