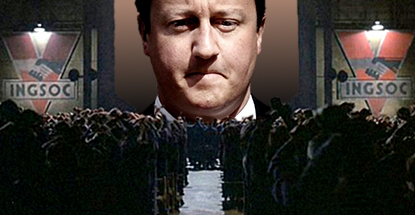 Online gambling sites will be blocked by default in the UK as internet service providers heed Prime Minister David Cameron’s latest ‘think of the children’ plea. In July 2013, Cameron announced his proposal to require all internet customers to opt-in if they wished to access a variety of ‘adult’ online material, including sites featuring gambling, pornography and violent content.

Sky was the first of the UK’s four major ISPs to make the move, announcing this week that it would roll out its new Sky Broadband Shield filter within the next 10 days. All Sky broadband customers will have to log in and alter their settings in order to continue accessing their favorite gambling and wanking sites. A Sky PR flack called the move “the right and simplest solution to a problem we all know is out there.”

There are now just two major ISPs – BT and Virgin Media – who have yet to go Orwell on their customers. BT is surveying its customers as to whether they want automatic filtering while Virgin has so far left it up to subscribers to switch on its custom filtering tools. So far, the voluntary take-up rate by Virgin subscribers has been under 10%, in keeping with a July 2014 report from Ofcom that found just 13% of new ISP subscribers had taken advantage of optional filters.

Critics have already seized on the fact that the filters are blocking a whole lot more categories of supposedly objectionable content than advertised, including sites related to alcohol, tobacco, drugs and anorexia. Transparency advocates Open Rights Group said last year that the websites of 54 registered charities had been blocked, apparently based on a wrong keyword or two.

Vicki Shotbolt, CEO of social enterprise project the ParentZone, called filters “at best a distraction from the most important way to look after your family online,” i.e. having open and frank dialogues with your kids. But that kind of personal responsibility wouldn’t give Cameron anything to crow about come the next general election, would it?