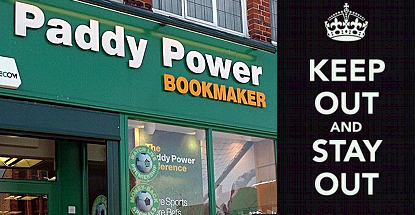 The UK government is preparing to deal yet another blow to retail bookmakers by giving local councils more power to prevent the opening of new betting shops. Existing law allows bet shops to take over any vacant bank, building society, estate agent or the like but the government intends to create a new planning class for betting shops that would allow local councils the discretion to reject new shops as they see fit. Prime Minister David Cameron is expected to announce the changes as early as Wednesday.

It’s unclear whether the government’s reforms will stop there. The Guardian claimed that the government also intends to reduce the current maximum wager available on Category B2 gaming machines, aka fixed-odds betting terminals, which a relentless media campaign has dubbed ‘the crack cocaine of gambling.’ Currently set at £100, the new limit would be somewhere between £50 and £100. However, the Independent suggested the government would leave the limits alone and settle for a ‘cooling off’ period for gamblers who wager on the high-limit machines.

Cameron’s moves will likely be met with some pushback by the gambling industry, especially companies like Paddy Power that have been expanding their retail footprint in order to match competitors like William Hill and Ladbrokes. Last year, Paddy Power engaged in a highly public but ultimately victorious battle with London’s Newham Council over their right to move into a vacant high street space. Paddy’s head of retail Andy McCue has also publicly traded barbs with Hills CEO Ralph Topping over this issue.

Given that the proposed changes would permanently preserve Paddy Power’s status as a retail also-ran in the UK, Paddy is likely to ask the new Competition and Markets Authority (CMA) to determine whether the changes are anti-competitive. A Paddy spokesman told the Telegraph the government’s changes would be “ultimately bad for consumers” and that planning reform was “a distraction from the bigger issue of how to deal with problem gambling.”

Bookmakers are likely looking over their shoulder, wondering when the next blow might fall. Already bracing for the imposition of the 15% online gambling point of consumption tax in December, the bookies recently learned that the UK government planned to raise the duty on FOBTs from 20% to 25% starting next March. That latter move convinced Hills to announce the imminent closure of 109 betting shops.