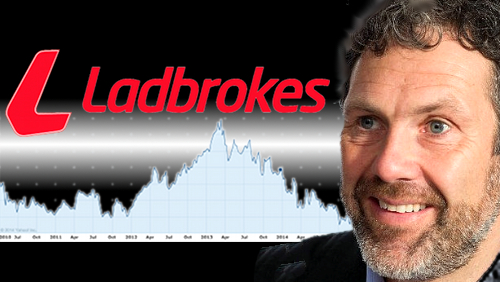 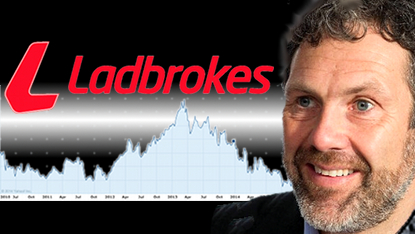 With Ladbrokes CEO Richard Glynn now departing after a four and a half year stint at the helm, the easiest thing to do is to go on and on about how the British bookie has declined and it’s all his fault and good riddance. But that doesn’t help anyone make money going forward. So yes, his tenure has been less than stellar just judging by Ladbrokes’ decline compared to its competitors since he became CEO in April 2010. The question is, what now? And in order to answer that, we need a deeper analysis than simply “Glynn failed, time to move on.”

If we look at the numbers going back to 2010, the truth emerges as a bit more subtle than a colossal failure. What we see, rather, is more like sloth and indecision for 3 years (2010-2012 inclusive) and then that sloth catching up to the company in 2013 and slamming it hard. What we see following that, however is that the company is now starting to move out of its stupor, just as Glynn is leaving.

Let’s start with 2010. Going back to that year when Glynn first took charge of Ladbrokes, total stakes were £15B, unchanged from 2009. £980M in revenue was also unchanged, as were cost of sales. This is just stagnancy rather than abject failure, which does reflect a failure to adjust to new markets. Administrative expenses that year were up 16%, but so was profit, excluding a massive tax settlement. On the good side, debt went down 39% from 2009 to 2010. The picture here is a company that is in essence responsible with cash and content with small profits, but dangerously stagnant in revenue.

2011 saw much the same trend. £16B was staked in total over the £15B of 2010, representing a modest increase of 7%, but revenue was unchanged. Cost of sales crept up 3%, administrative expenses were stable, and debt was down another 6%. The big problem, however, was that EBITDA was also down 8.5% that year. So again, a conservative, stable company, good with cash, but clearly not innovating enough or doing anything new. Just resting on its well-branded name and letting inertia pull it along it seems.

Fast forward to 2012 and there is a bit of an improvement, as nearly £18B was staked in total, a rise of 12%, and revenue finally moved up a bit to just over £1B, a growth of 11% for the year. EBITDA was up 25% which is alright, but less impressive considering the drop of 8.5% the year before. Again debt was down a nice 15% and operating costs up only slightly. The problem, however, was bubbling underneath the surface. Despite the relatively good year, digital growth was very small, only 9% growth from the year before, and ominously operating profit in the digital sector was down sharply by nearly 40% (page 8). That plunge in that key market was to set the stage for the disaster that was 2013 for Ladbrokes.  By contrast, 2012 saw a 27% growth (page 24) in the online market for Ladbrokes competitor William Hill.

2013 was the year that really kicked Ladbrokes in the groin. There was still no change in revenue, operating expenses shot up 17%, EBITDA was down a perilous 35% and net income crashed an incredible 65%. 2013 was the year that Ladbrokes decided to completely revamp its digital offering and team up with Playtech. Digital had crashed embarrassingly by over 74% (page 5) in operating profit, and 14% in unique active players. By contrast, William Hill was having a ball in digital marketing, with 48% of the company’s entire operating profit coming from that sector alone. Hill had also teamed up with Playtech, and it paid off handsomely. For Ladbrokes, digital accounted for £8.2M out of £144.2M in operating profit, or a measly 6%.

You can easily see, in a long term chart comparing William Hill with Ladbrokes, that 2013 really was the year that Ladbrokes fell substantially behind. By late 2012 the two companies were almost equal in terms of stock price trends, and then the fall.

So the key was mobile and digital, which, well, sort of makes sense being that no one can look up from his phone and/or desktop these days for even a second.

As for 2014, Ladbrokes is finally showing some real signs of growth in that crucial market. Here’s one chart, taken from its half-year report, which shows just how clearly Playtech’s mobile app Mobenga has so far reversed the company’s misfortune in the mobile arena. 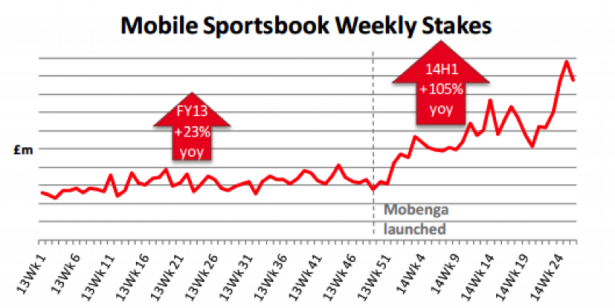 So the answer is that Richard Glynn’s tenure was not a total abject failure. The main problem was not that the right moves were not made, only that they were made a year or two too late. And yet, the one thing that Ladbrokes has over its competitors is name recognition. Once it becomes competitive in the digital market, and that appears to already be happening, the stock price will spring right back up as it takes market share back from its competitors. If anything, Richard Glynn was financially responsible though slow at the wheel. If the new CEO continues the first tradition but acts a bit quicker on his feet, then LAD should have already found its bottom at around 110.