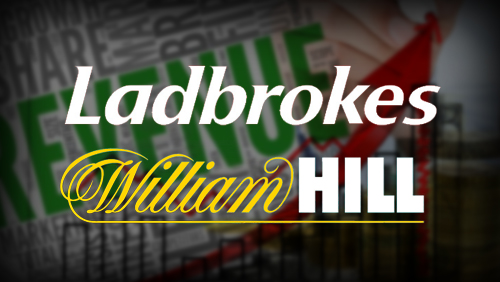 The shares of both Ladbrokes (LAD.L) and William Hill (WMH.L) have been in something of persistent vegetative state, Hill since the end of 2012, and Ladbrokes since all the way back to the global financial crisis. While Hill has been doing decently and growing its bottom line, Ladbrokes has been a disaster. The good news is that positive numbers are finally coming out for the two bookies together, which could either be a blip or a sign of a recovery in the industry. How you see it depends on how you interpret the results for Paddy Power (PAP.L). Allow me to explain.

Ladbrokes has been suffering from runaway increases in the cost of doing business. Though revenues have been growing, barely, its net earnings have plummeted as operating costs have gone through the roof. In its latest interim report for Q3, however, there are signs that this sad trend may finally be reversing.

Here are the key numbers for Ladbrokes: Operating profit is up 94% year over year compared with 13% revenue growth. This is the opposite of what has been killing the company up to now, being anemic revenue growth and shrinking profit. A very healthy 172% revenue growth in Australia is giving new life to the company, and with Spring Carnival in Australia due next quarter, there could be even more impressive numbers coming out of the Outback by the end of the year. On top of that, Ladbrokes reduced its debt load by £23M or 5.4%, not spectacular but not bad either, and certainly much better than going deeper into debt.

Growth in Australia is especially impressive considering that the Aussie dollar has stayed steady against Sterling for a year now. This is significant because falling exchange rates often lead to higher gains on paper, but since that has not been happening between the Pound and the Aussie dollar, the gains can be considered more real. The bad sign is that a new 25% tax rate on gaming machines will go into effect starting in March 2015. This will take a hard bite into Ladbrokes’ fragile UK retail market, which was driven by machine growth this quarter. Net revenue was up 6%. It could even be that in preparation for the tax, UK betters are making use of betting machines more now before the tax takes effect. That would mean the growth in that sector is artificial. We’ll find out by the middle of next year, but it doesn’t look great.

When considering the possible effects of a 25% VAT on an industry like gaming machines, it is well to keep in mind what happened to the yacht industry in New Jersey in the early 1990’s. Back then, Congress passed a 50% luxury tax on cars, airplanes, and boats over $100,000. Yacht orders fell from 400 to 10 the year after the tax and the entire yacht industry shut down in New Jersey until the tax was repealed. Not that that same thing will happen here, but it’s never good. The effect of a 25% tax can be magnified depending on how elastic the demand is for a product or service. Machine-based betting could just shift to online, which is probably what will happen in order to avoid the tax, crippling the machine segment and providing an artificial stimulus to online booking.

We also have the 15% Point of Consumption tax going into effect on December 1. How will this affect Ladbrokes? That, as we’ll see in a minute, is the ultimate question.

Conclusion: Numbers for Ladbrokes are finally looking up, a little bit, but serious tax issues threaten to crush any nascent recovery.

Highlights for William Hill from its interim Q3 report include an increase in net revenue of 23%, and a healthy 89% growth in operating profit. Online operating profit growth was especially robust at 126%. And something is up with Australia these days, as operating profit from there is up an amazing 384%. Besides the stable exchange rates mentioned above with the Aussie dollar, there is also the fact that UK price inflation is at its lowest quarterly rate since 2004, at least officially. While I don’t put too much stock into government CPI numbers, growing operating profits in the face of low official inflation numbers can’t be a bad thing.

But Hill is facing the same tax issues as Ladbrokes. Machine growth is still fragile at 8% and will likely be slashed bigtime come March. The bookie says it’s prepared for the December 1 POC tax, but words are cheap. It gives no hard figure as to how the POC would have affected it had it been in force this quarter. We need to know that number to know if it is indeed prepared for the new tax regime.

For a clue, we go to Paddy Power. Paddy is not looking so great. Unlike the other two, operating profit is down 44% for the first half of the year in the online segment, and EBITDA is down 12%. In spite of this, dividends are up 11% in an attempt to attract shareholders in the face of these numbers. This goes back to the buyback climate capital markets are currently mired in.

Here too though, Australia is outperforming by a large margin. The online Australian segment is up 57%, though the rest of Paddy’s online division is down 44% with revenue down 20%. One bright spot for this bookie is that active customers are up 21%. Overall, Australia is up 32% in net revenue.

But here’s the kicker: The new 15% POC, says Paddy Power, would have meant a slash of €20M (see page 13, link above) to its bottom line in 1H2014, which would have been 72% of its operating profit. The government really knows where to hit, it seems.

Notwithstanding the budding recoveries of Hill and Ladbrokes, if the applicable POC tax is anything close to what it would have theoretically been for Paddy Power come December 1, those recoveries will disintegrate pretty quickly. The 25% tax on betting machines is less ominous because demand will simply shift to the online segment. But the 15% POC tax is inescapable. We’re about to see how prepared the bookies really are.