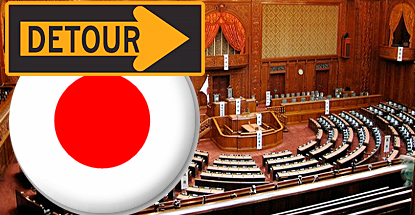 Stop us if you’ve heard this one before, but legislators in Japan think they’ve come up with a way to push through their long-delayed casino bill.

The legislators hope to resubmit last year’s aborted legislation to the Land and Transport Committee, a minor legislative body that traditionally deals with mundane issues like utility pole management.

The idea is to bypass the casino bill’s traditional path through the Cabinet Committee, which is up to its neck in higher priority legislation – including national defense issues stemming from the recent beheading of a Japanese citizen by ISIS fanatics – and likely wouldn’t choose to waste its time on comparatively minor and highly divisive issues like authorizing casino development.

LDP legislator Takeshi Iwaya told Reuters that it doesn’t matter what path the casino study bill takes, “as long as the ruling coalition can agree and win support.” Casino supporters hold a majority in Japan’s Diet but opposition has come from the LDP’s coalition partner Komeito, a Buddhist-backed party with moral qualms about expanding gambling options.

Japan’s most recent push to pass the casino study bill died in November when Abe dissolved parliament ahead of national elections. Although Abe won a larger majority in the legislature, the public bickering over the casino issue must have left a bad taste, as the bill appears to have slid well down Abe’s list of priorities. Suggestions have been made that legislators are waiting until local elections wrap up by the end of April before making a concerted casino push.

The casino study bill would amend Japan’s constitution to permit casino development and is a necessary precursor to passing a second bill that would spell out the nuts and bolts of casino operation. Potential casino sites would then need to be vetted, along with casino operator license applications. With all that yet to be accomplished, hopes of opening the country’s first integrated resort in time for the 2020 Olympic Games appear to have been well and truly dashed.