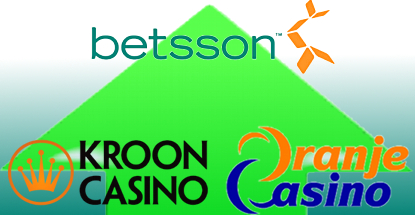 The numbers were boosted by last February’s acquisition of the Dutch-facing Oranje and Kroon Casino brands, which contributed SEK 89.9m to Q4’s revenue total. Absent these new brands, organic revenue growth was 11%. Betsson also reached a favorable agreement during the quarter regarding the final top-up payment to the new brands’ former owners, Nordic Gaming Group, that boosted Q4 net income before tax by SEK 40.1m.

Betsson’s B2C operations gross profit grew 25% in Q4 to SEK 518.8m, while B2B operations were up 22% to SEK 161.8m. Betsson earned 69% of gross profit from its casino vertical, up from 66%. Sports betting gross profit held steady at 27% of the overall figure, despite a 24% boost in turnover during the quarter. Poker profits fell by 20% to to just SEK 20m due to “a continued decreased level of activity in poker networks” in Betsson’s markets.

Betsson’s mobile channels accounted for 23% of Q4’s overall revenue, twice the amount from a year ago and up 6% from Q3. Mobile sports betting accounted for 43% of sports turnover but poor margins prevented mobile from increasing its share of betting revenue.

Nordic markets generated 71% of Q4 revenue, down from 85%, while EU markets outside the Nordic region rose from 14% to 27%. Customer deposits rose 32% in the quarter and “have never been higher,” despite a small year-on-year decrease in active customers.

Looking forward, Betsson says Q1 2015 has started with revenue “somewhat above” the average level in Q4. The only other notable occurrence to date was the shift to the Nasdaq Stockholm Large Cap on Jan. 1.

Betsson says it’s still developing its online lottery joint venture with a Chinese firm, although it noted that the anticipated new legislation to permit that venture to launch has reportedly been postponed. Regardless, Betsson says it has a “continued positive view” on the Chinese gaming market outlook.