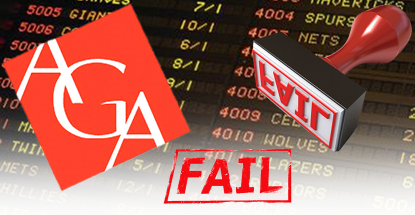 Americans betting on the 2015 Super Bowl will wager over $3.8b with unauthorized sportsbooks, 38x the $100m that will be wagered with Nevada casino sportsbooks.

So sayeth the American Gaming Association (AGA), whose CEO Geoff Freeman believes the numbers indicate that the current prohibition on sports betting outside Nevada is “clearly failing.” Freeman said the AGA are “closely examining the current state of sports betting, the laws that govern it and the best way forward for the gaming industry.”

The AGA based its math on a 1999 National Gambling Impact Study Commission report, which estimated between $80b and $380b was spent annually on illegal gambling. The AGA compared the $80b figure with the sum wagered with Nevada sportsbooks in 1999, then compared that with Nevada 2013 sportsbook handle. Nevada sportsbooks handled a record $119.4m on the 2014 Super Bowl, keeping $19.7m of that cash for themselves thank to the Seahawks’ pummeling of the Broncos.

In a speech on Thursday to the US Conference of Mayors, Freeman said the AGA wants to “partner with policymakers to revisit outdated policies in order to create an environment where gaming can thrive.” That may prove more difficult than Freeman envisions, as demonstrated by the Sisyphus-like struggle of two New Jersey Congressmen attempting to pass sports betting legislation.

The bipartisan pair of Rep. Frank Pallone Jr. and Rep. Frank LoBiondo are trying to end the tyrannical rule imposed on their home state’s residents by the 1992 federal PASPA sports betting prohibition that limits single-game wagering to Nevada. This week saw the two New Jersey pols resubmit the sports betting legislation they’ve been trying to pass for the past three years.

Pallone’s HR 457 would exempt New Jersey from PASPA’s control while LoBiondo’s HR 416 would allow all states a four-year window in which to enact their own sports betting legislation. The two Franks immediately co-sponsored each other’s legislation then put the bills back on the shelf with the others and got working on 2016’s edition.

New Jersey is currently awaiting its date with destiny and/or the US Third Circuit Court of Appeals as the state seeks to overturn the injunction imposed on its latest sports betting legislation. On Wednesday, the court set a Tuesday, March 17 date in Philadelphia, at which time the three-judge panel will determine whether oral arguments will be required.