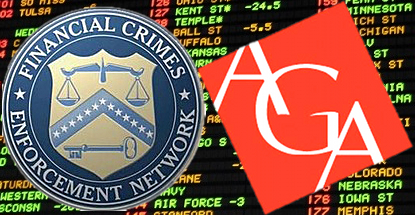 In a Dec. 24 letter to AGA CEO Geoff Freeman, FinCEN Policy Division Associate Director Jamel El-Hindi made it clear that that the focus was on so-called ‘messenger’ bets, in which a bettor places a wager with a sportsbook on behalf of a third party. El-Hindi claimed such bets were “facilitating criminal activity and posing a money laundering risk to the US financial system.”

El-Hindi said FinCEN believed casinos were “under the impression that unless specifically directed to do so, a casino never has to ask a patron whether he or she is betting on his or her own behalf or on behalf of another party.” FinCEN had reached out to the AGA ‘to correct any such misperception.”

In response, Freeman released a statement saying the AGA “welcomes continued guidance from FinCEN to guard against attempts to use casinos for money laundering and illicit financing.” Freeman said AGA casinos “routinely look for suspicious bets at sports books,” with the possible exception of all those times that they didn’t.

MONTREAL COP PLEADS NOT GUILTY TO BOOKMAKING
On Friday, Montreal police Sgt. André Thibodeau appeared in court to address the 11 charges he’s facing as a result of Thursday’s takedown of a Mafia-linked illegal sports betting operation. Thibodeau, a 25-year veteran of the force who has been suspended without pay, pled not guilty to charges of bookmaking, breach of trust, obstruction of justice, gangsterism and knowingly making people commit (directly or indirectly) a criminal offence.

ADAM MEYER’S ‘VICTIM A’ UNVEILED
Milwaukee’s ABC television affiliate has identified the mega-bettor who was the victim of a $25m extortion scheme allegedly perpetrated by Real Money Sports tout Adam Meyer. The bettor, identified only by the alias Victim A in court documents, was allegedly subjected to harassment and threats by Meyer and an associate who produced a gun during a face-to-face encounter in the bettor’s Fond Du Lac home in April 2012. Meyer pled not guilty earlier this month to fraud, extortion and weapons charges.

On Friday, Action 2 News identified Victim A as Gary Sadoff, owner of the Badger Liquor Company, a Wisconsin-based distributor of wine and spirts that has been family-owned since 1935. Sadoff wrote an email to employees in which he confessed to being Victim A. Sadoff said he’d “made a series of payments to protect my family” following “numerous warnings of violence” from Meyer. Sadoff assured employees that “these events happened several years ago and had no effect on our company.”