US Treasury wants casinos to monitor sportsbooks for ‘red flags’ 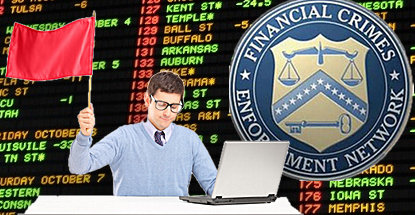 The US Treasury Department intends to keep a sharper eye on the money flowing through casino sportsbooks in order to guard against potential illegal betting. On Tuesday, Reuters quoted two sources saying the Treasury’s Financial Crimes Enforcement Network (FINCEN) will spell out certain ‘red flags’ in betting activity that casinos will be required to report.

One source said these flags include unusually large wagers, on the assumption that they could represent international online betting sites laying off action with Nevada books. (In fact, the exact opposite scenario seems far more likely, as international sites tend to have far more tolerance for risk than Nevada books.)

FINCEN and the Internal Revenue Service have stepped up their monitoring of the US casino industry following a number of high-profile instances of chicanery. A year ago, sportsbook operator CG Technology reached a $5.5m settlement with Nevada gaming regulators over its failure to flag millions of dollars worth of illegal messenger bets approved by then-VP Mike Colbert on behalf of an East Coast outfit known as the Jersey Boys. CG Technology, then known as Cantor Gaming, was also found to have fallen woefully short of record-keeping requirements.

SILVER INVITES CHRISTIE TO WASHINGTON
Meanwhile, National Basketball Association Commissioner Adam Silver has encouraged New Jersey Gov. Chris Christie to go to Washington if legal sports betting is the good guv’s true desire. In a conversation with EPSN’s Outside the Lines program, Silver said he he’d be “happy to join” Christie in prodding federal legislators about a rethink of the 1992 federal PASPA sports betting prohibition.

Silver, who has publicly lobbied for a federal framework for legal sports betting, told ESPN that Christie should go to Congress and list “all the reasons [betting] should be regulated, but let’s come up with a framework that makes sense on a national basis presumably that would allow states to opt in.”

A day later, Christie called Silver’s invitation “kind of crazy,” given the NBA’s continued opposition to New Jersey’s obvious desire to opt in all on its own. Christie characterized Silver’s stance as “bait and switch,” suggesting Silver might not want to wait around D.C. too long to see if Christie shows.

In the meantime, New Jersey awaits its hearing with the US Court of Appeals for the Third Circuit on the legality of the state’s latest plan to go it alone on sports betting. Last week, Christie filed a motion to expedite the case on the grounds that “much of the factual and procedural background of this case will be familiar to the Court.” Christie wants both the state and its opponents – four pro sports leagues (including the NBA), the NCAA and the US Department of Justice – to file their opening briefs on Jan. 14, with response briefs due by Feb. 13 and reply briefs by Feb. 27.