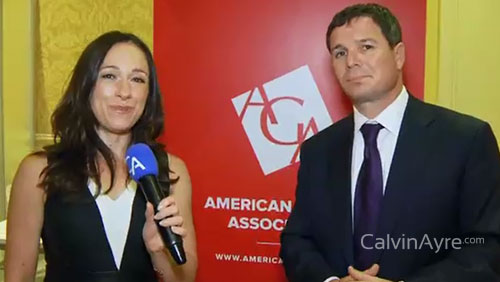 Becky Liggero talks to Geoff Freeman of American Gaming Association as he talks about the gaming and casino industry and why inspiring innovation in the casino industry is so incredibly important.

Becky Liggero: Gaming is viewed more favorably now than ever before, so I am wondering now, why is this happening?

Geoff Freeman: We did a survey early this year. A nationwide survey of Americans, and what we’re finding is that Americans feel better about gaming than ever before, nearly 90% feel that it’s alright for them or the people they know. I think the big thing that has changed with gaming is while the critics have remained, more and more Americans have seen the industry. They’ve experienced the industry first hand, and they understand all that sky is falling render from the critics, none of them bears fruit, none of them is coming true. The fact is, this industry is a community partner, crime is often going down when the industry comes in, small businesses are thriving. This industry is an entity that could really help and economy grow and people are seeing it first hand and they are embracing the industry for what it is.

Becky Liggero: We know that the industry is doing quite well here in Las Vegas with the casino industry. So why are we seeing such a decline and demise in New Jersey in Atlantic City?

Geoff Freeman: I think what we’ve seen across in the United States is greater competition. We released a research earlier today talking about the impact of nearly 1000 casinos in the United States and what that does to various properties. When Atlantic City began, it was really the only show in town on the east coast, with Las Vegas out on the west coast it had a monopoly. That monopoly is gone and when monopolies go away and competitions increases, it really comes down to what are you going to do to attract the customer. Any investor who had been to Atlantic City can acknowledge, the infrastructure is not ideal, the process of getting there is not what you’re looking for, too many frictions in that process. We’re in a highly competitive environment, Atlantic City is adapting to that, every other community is adapting to that.  I don’t think it’s about gaming as much as it is about competition and that need to grow and offer your customer something new.

Becky Liggero: I know you said that the casino industry is just one part of a multifaceted economic strategy, can you elaborate on that?

Geoff Freeman: We’ve all seen these industries that wanted to bring gaming in and tax it to some enormous amount, and talk about how it will save their education system, or reduce everyone’s taxes. The fact is that gaming is not a panacea; gaming is an entertainment option where people can spend discretionary dollars. Even in Las Vegas, you see diversification; you see a focus on some other things. You look at a place like Pittsburgh where they have a casino now that’s thriving. No one would say that Pittsburgh is a gaming town, it’s a multifaceted town where gaming can be a great supplement to the economy they already have.

Becky Liggero: So why is inspiring innovation in the casino industry so incredibly important?

Geoff Freeman: Well I think, the fact is, that the industry is bigger than ever, the industry has done extraordinary well over 20 years but we are at a crossroads. Our customers are changing, gross gaming revenues are down, slot play is down, consolidation is sweeping the manufacturing industry. We’re going somewhere different, and what worked for us in the last 20 years is not what’s going to work for us in the next 20 years. We have to adapt to these customers. We have to give people what they want. We have to figure out how we’ll succeed in a very competitive environment, that’s still a high tax environment with some regulations, it’s just going to make you shake your head. We have to innovate; we have to give that changing customer what they want. The slot machine of yesterday won’t be the machine of tomorrow. This industry is really going to be about innovation. What’s great for the industry is that we were built by entrepreneurs, we were built by people who had innovation in their DNA. We need to use that, we need to find that again to reinvent this industry for the future.