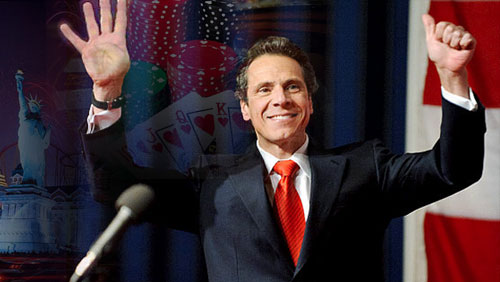 Gov. Andrew Cuomo urges the state Gaming Commission to reopen bidding for a casino in the Southern Tier, saying the area would benefit from the development.

The governor, who has said he has no role in the approval process, sent a letter Friday to the State Gaming Commission asking that it reopen bidding for a fourth license in the Southern Tier region. The request came nine days after Mr. Cuomo said he doubted that such a project would benefit that area.

“Indeed, as this would be the last license issued in New York State, it may excite national competition by interested parties that submit even better applications than the first round,” Cuomo wrote in the letter. “If you agree to this request, the (casino board) should quickly establish a process for the fourth license that could be complete as expeditiously as possible, as the Southern Tier needs jobs and investment now.”

Cuomo’s letter comes after increased pressure from local leaders after two casino applicants in the Southern Tier — Tioga Downs in Nichols and Traditions resort in the Town of Union, Broome County — lost to a casino proposal in Tyre, Seneca County, more than one hour away.

Developer Jeff Gural, who’d hoped to add a casino to his pre-existing racino Tioga Downs, expressed his anger at the governor after his bid wasn’t awarded the license, saying he was pissed at the decision after he contributed $800,00 at Cuomo’s behest last year to help referendum pass that legalized casino gambling in New York.

Gural also said that putting a full-fledged casino in the Southern Tier is logical because the closest competitor is Mohegan Sun at Pocono Downs, 90 miles south in Wilkes-Barre, Pennsylvania.

It’s unclear whether the siting board can decide on its own to reopen the bidding process.

In a press briefing held after the first three licenses were announced, siting board member and Hofstra University president Stuart Rabinowitz said the board’s work was done and any decisions to grant new licenses would have to come from an act of the Legislature and the governor.

A spokesperson for the gaming commission said only that the commission has received the governor’s letter and is reviewing it.