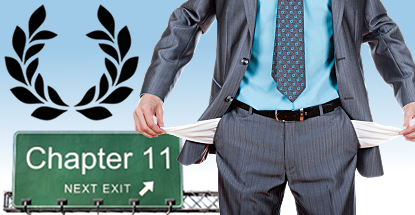 UPDATE: Caesars has confirmed that it has reached agreement on the bankruptcy plan with all members of its first lien noteholder steering committee.

Caesars Entertainment has reportedly reached agreement with two senior creditors on a deal that would push the debt-laden casino operator into Chapter 11 bankruptcy by Jan. 15. On Monday, Caesars informed the markets that it had “elected not to pay” a $225m interest payment it owed its second-lien creditors, starting a 30-day countdown to the company officially being in default of its debt obligations.

On Friday, Bloomberg reported that Caesars had inked a deal with its senior bondholders that would pave the way for that bankruptcy filing. Caesars has been frantically negotiating with its first-lien creditors to figure out a plan to restructure its Caesars Entertainment Operating Co. (CEOC) division, which holds $18.4b of Caesars’ overall $25.5b debt.

Caesars needs to get two-thirds of its first lien creditors on board before the deal can move forward. Last Friday (12), more senior creditors exited the negotiations after determining that Caesars’ finances were too messy to be rescued by the proposals Caesars was putting forward, which included taking out a $2.6b mortgage on its flagship Caesars Palace property in Las Vegas.

Caesars has proposed a real estate investment trust plan in which CEOC would be split into two companies: one to manage its casino properties and another to own the real estate on which those companies stand. Under this plan, senior creditors would be guaranteed nearly 100% of their money while second-lien bondholders would be forced to accept pennies on the dollar in the form of equity in the restructured company.

The deal will shave $10b off CEOC’s current debt and reduce Caesars’ annual interest payments by around 75% to $450m. Caesars will contribute $1.45b cash to CEOC for the restructuring.

Multiple junior creditors have already filed notices of default against Caesars, accusing the company of illegally shifting its more profitable assets out of CEOC into untouchable spinoffs like Caesars Growth Partners. On Wednesday, the Delaware judge handling two of these lawsuits said a trial wouldn’t happen until after a mid-January hearing to consider a Caesars’ motion to dismiss the suit. Federal law requires a bankruptcy judge to give permission for such suits to go forward while a bankruptcy is active.