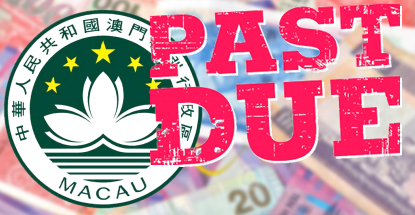 Reuters says the value of the signed junket contracts it was allowed to inspect were less than this sum but allowed for the possibility of side-betting, in which the face value of the chips is subject to a multiplier of up to 10x. And then there’s interest. There was a time when gamblers paid their markers within 30 days. Many gamblers are now making installments with a monthly interest rate of 3%.

Other gamblers simply aren’t paying at all. Last month, the Hengsheng Group said nearly a third of its outstanding junket loans had reached their first birthday. Analysts at Standard Chartered have begun throwing around the word “broken” when referring to Macau’s junket industry model. Junkets now have to fight for increasingly scarce VIP gamblers and the knives are coming out…

Lu has strong ties to some higher-ups in China and one of his companies employs the daughter of an army general. Lu’s connections are making it hard for his creditors to press the issue and Reuters quoted local media saying two of Lu’s creditors were recently arrested for undetermined causes. Charlie Choi, founder of the infamous ‘name and ‘shame’ gambling debtor site Wonderful World, says Macau needs to institute “a system to let creditors and operators know the risks.”

The general uncertainty may have contributed to delays in a major junket acquisition. In January, Hong Kong-listed International Entertainment Corp (IEC) announced it was acquiring a 70% stake in junket investor Suncity international Holdings. But midway through October, IEC announced it had yet to seal the HKD 7.35b ($948m) deal. IEC said talks remain ongoing but it’s not hard to imagine it’s lobbying hard for a discount given the changing reality.

And just when junkets were on the ropes, the promise/threat of more regulation loomed. On Monday, Macau’s Official Gazette published an order authorizing the signing of an anti-money laundering and anti-terrorist financing agreement with the United States. At some unspecified date, Macau intends to sign a memorandum of understanding on sharing financial info with the US Treasury Department’s Financial Crimes Enforcement Network (FINCEN). The US has long pressed for such a deal based on its agents’ uncanny ability to see terrorism financing in pretty much everything except one-dollar bills stuck in stripper’s g-strings.