Home / Poker / Calling the Clock: Fleyshman to Lead IveyPoker Charge; The Cobra Set for WPT UK, and Much More 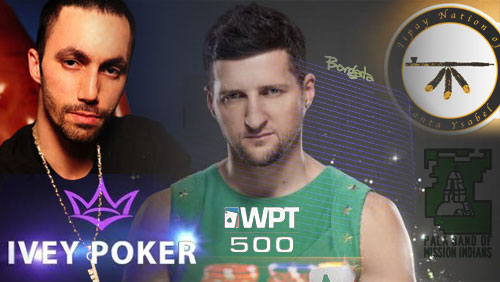 Go and put the kettle on as Lee Davy recaps the most prominent news stories of the past week including: Dan Fleyshman being appointed as the new CEO of IveyPoker, a few interesting news stories from the Californian Tribal nations, a record breaking World Poker Tour Caribbean Main Event, and much more.

Let’s start our weekly round up with some news concerning the world’s greatest poker player.

Last week we brought you news of an IveyPoker sabbatical, as the social media online poker room closed down for renovations, and this week we can reveal that the former CEO of Victory Poker, Dan Fleyshman, has been handed the task of breathing some new life into the project.

With Fleyshman leading the new IveyPoker revolution, the main man can carry on doing what he does best: defending his name in courtrooms.

Despite, Sir John Edward Mitting, refusing Ivey the right to appeal, after siding with the Genting owned Crockford Casino, in the recent ‘edge sorting’ lawsuit conducting in a London High Court – Ivey’s legal team has lodged an appeal with the Court of Appeals.

The result will be crucial for Ivey, after The Borgata revealed plans to add the Crockford ruling to their own ‘edge sorting’ court case, where the two will butt heads over $9.6m in baccarat winnings.

One doubts that Ivey and The Borgata are on each other’s Christmas card list. Interesting, when you consider that this week the Atlantic City casino agreed a deal to allow The Pala Band of Mission Indians to open up an online casino using their New Jersey license. Phil Ivey is, after all, an ambassador for the Californian tribe.

The move goes to show that the land-based casinos are open to multiple online sites using their license, as The Borgata already has a very strong relationship in place with bwin.party.

The Pala Band of Mission Indians aren’t the only Californian Tribe in the news this week, after the Iipay Nation of Santa Ysabel decided to give the Californian online gambling lawmakers the two finger salute, when they launched real money online bingo.

You may remember that the Santa Ysabel Tribe threatened to be the first real money online poker room in the state, when they revealed their intention to open real money games on their Privatetable website.

Those teeth never bared, but the recent decision to team up with Great Luck LLC. to launch Desert Rose Bingo does carry some bite.

Moorman’s Book of Poker is Mustard

If California was to start a real money online gambling community, then you have to think Chris Moorman would walk into town and take over.

The $11m man is currently in the South African jungle, trying to avoid being blinded by flying Dung Beetles, but back home sales of his new book Moorman’s Book of Poker are flying off the bookshelves quicker than a library in German occupied territory during the second World War.

Moorman’s Book of Poker is absolutely mustard, and if you are struggling for something to buy your poker friend for Christmas then look no further than this masterpiece.

Four more individualistic poker stories to talk about and we will start with Darren Elias. The WPT Champions Club member is a record breaker after becoming the first-ever player to win back-to-back WPT Main Event titles in a single season.

Elias achieved his feat after winning WPT Caribbean in St. Maartens, a few months after his first WPT victory at the Borgata Poker Championship. ‘Mad’ Marvin Rettenmaier also went back-to-back, but his triumphs overlapped both the tenth and eleventh season.

Another man singing, ‘winner, winner, chicken dinner’, is Steve O’Dwyer. The American was staring down the barrel of his worse return since he started racking up live cashes, before taking down the $1.8m prize in the Asian Championship of Poker (ACOP) Super High Roller in Macau. O’Dwyer defeated Ryan Fee in heads-up action to claim the title as his own.

Another sponsored pro has bitten the dust, only this time the player has told the press that it was his choice to leave – and for once we believe him.

Manuel Bevand has left Winamax to concentrate on…well…his life basically. He doesn’t know what he is going to get up to, but he does know that EPT Prague will be his last contest wearing the Winamax colors.

And finally, the WPT have added some star power to their upcoming WPT UK event after announcing that the reigning WBA & IBF boxing champion Carl ‘The Cobra’ Froch will be sitting down to play in the WPT500 event on Sat, 15 Nov 2014.

“If you are my table I want to knock you out.” Said Froch.

The preliminaries for WPT UK are already underway at the Dusk till Dawn poker room in Nottingham. Both the WPT500 and the WPT UK Main Event carry £1m Guaranteed Prize Pools.