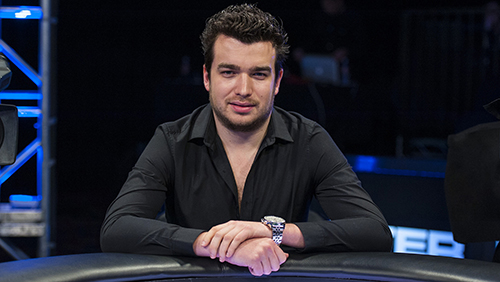 Lee Davy takes a look at the most eagerly awaiting book launch of the 2014 poker calendar: Moorman’s Book of Poker by Chris ‘moorman1’ Moorman.

I have been sleeping with Chris Moorman for a week now. His face is the last that I see before I go to bed, and it’s the first one I see when I wake up in the morning.

He has signed the first page.

The scrawl reads: “No more questions!”

After reading Moorman’s Book of Poker I don’t feel capable of asking any.

It has sent me back to basics; made me realize that I know nothing about poker. I now realize that the difference, in quality, between the truly elite and the people like me, is like comparing the driving of Lewis Hamilton with Roy Orbison – and yes I know he’s dead.

I feel stupid on so many levels. I would like to tell you that I’m thinking one dimensionally, but I don’t even go that far up the intellectual ladder. Like Big Bird, my thinking seems to be stuck on the same street, a range is somewhere that the deer and the antelope play, and I drown in distractions.

The book contains 80 hands, as played by the book’s co-author Byron Jacobs, and deliberated, cogitated, and dissected by the greatest human being to EVER play online tournament poker.

All of the hands are from online poker tournaments – although capturing the essence of several different formats – and in each one Moorman shows why he has won over $11m doing so much more than just clicking buttons.

Moorman scribbled ‘No more questions’ on the inside of my copy for obvious reasons. The poker community completely under-estimates the influence and impact this man has had on the history of the game. If we opened an Online Poker Hall of Fame he would be the first person inducted. The man is the only legend in online poker.

So I ask him a lot of questions.

And he doesn’t answer that many.

Shy and retiring is not the correct phrase, but when it comes to talking about the game, and his life, Moorman would prefer it if you asked someone else. He’s not being rude, it’s just not for him.

So this is a real treat.

No it’s more than that.

It’s all of your favorite desserts rolled into one.

You will view the game differently after reading this, but most importantly, you will find a newfound respect for the game. After reading the first 20-hands the obviousness of it all hits you in the forehead like a dart from Phil ‘The Power’ Taylor.

How can you possibly think like he does, whilst playing eight tables, checking Facebook, and watching Manchester United get humbled by the next mediocre football team?

Since when did it become acceptable to think that you could be a winner playing this game whilst only giving it 30% of your attention span? When you read the thought process of Moorman, you realize that unless you concentrate fully on the game, you will always be swimming in the ocean waiting for the hook to pull you into the world that you have been told exists only in fish fairytales.

With Christmas just around the corner, treat yourself to a copy of Moorman’s Book of Poker.

Inside you will find more treats than a giant bag of revels.