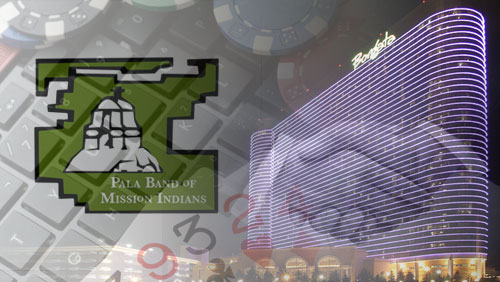 The Pala Band of Mission Indians are set to become the first Indian Tribe to offer online gambling, in the state of New Jersey, after striking a deal with the Borgata Hotel Casino & Spa.

The Pala Band of Missions Indians will make history as the first-ever Indian Tribe to offer online gambling in the state of New Jersey, after their online offshoot, Pala Interactive LLC, inked a deal with the Marina District Development Company LLC, and the Borgata Hotel Casino & Spa, that will see them use their online gambling license to offer their products.

The New Jersey Division of Gaming Enforcement (DGE) approved the deal subject to a six-month test phase that started on the 31 Oct 2014.

It’s an interesting deal for many reasons.

Partypoker operates off a Borgata Hotel Casino & Spa online gaming license, and the pair has enjoyed a fruitful relationship that has seen them become the front-runners in the burgeoning New Jersey market.

The two brands will obviously run one-man gang’s, but it just goes to show that land-based casinos, in Atlantic City, are open to the possibility of forming bonds with more than one online gambling operator.

It’s also an interesting development because the CEO of Pala Interactive is the former CEO of bwin.party. Jim Ryan left bwin at the tail end of December, when he was quoted as telling the media that he wanted to spend more time with his family. A picnic, and one visit to the zoo later, and Ryan was being announced as the head of Pala Interactive LLC.

It was an interesting appointment, not least because the California online gambling market turned out to be a bit of a boondoggle for Pala Interactive LLC. The tribe operates the land-based casino, Pala Casino, in San Diego.

“Hopefully we’re going to surprise and delight and build some meaningful market share in New Jersey,”  Jim Ryan told the Associated Press after the deal was struck.

Phil Ivey and the Borgata?

Another interesting twist in the tale involves one Phil Ivey. The man who is deemed to be the greatest poker baccarat player that has ever lived, is currently in dispute with The Borgata Hotel Casino & Spa, over $9.6m worth of baccarat winnings that Ivey took away from The Borgata in 2012.

Ivey lost that case, but has only this week appealed the decision.

So what does this have to do with Pala Interactive LLC?

Back in the summer of 2013, Phil Ivey signed on the dotted line to be their ambassador. Ivey no doubt did this with one eye on the exposure he would garner in California, and never in a million years dreamed that there would be a conflict of interest with The Borgata.

Are we going to see banners of Phil Ivey rolled out at The Borgata?