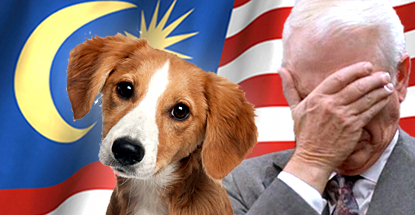 A right-wing Malaysian organization has blamed a recent spate of tornado activity on the country’s tolerance of gambling, alcohol and dog-petting. The accusation was made via the Facebook page of the Selangor chapter of Perkasa, a group renowned for race-baiting in its self-appointed quest to protect ethnic Malays from foreign influence and non-Islamic practices.

The Facebook post noted that tornadoes usually gave the region a miss, prompting the rhetorical question as to what caused them to change course. The rhetorical finger of blame was pointed at “widespread vice, such as gambling centers, prostitution, beer and dog-petting festivals.”

Malaysia’s legit gambling options are few, having only one legal casino and a limited sports lottery service. But the country is awash in illegal betting options, as confirmed during the 2014 FIFA World Cup, which kept local police playing bookie whack-a-mole.

Perkasa’s reference to ‘beer’ has to do with the country’s non-Muslim residents celebrating Oktoberfest with Carlsberg Malaysia. The posters for this year’s event featured a porno-Heidi type with enormous knockers and a plunging neckline, which prompted one Muslim politician to describe the event as “mass-promoted adultery.”

The reference to ‘dog-petting’ involves last Sunday’s I Want To Touch A Dog public gathering in Bandar Utama in Selangor state, which attracted over 1k participants from all religious faiths. Local clerics howled over this apparent insult to Islam and its (hotly disputed) view of dogs as ritually unclean.

Khalid Samad, a member of the Pan-Malaysian Islamic Party, wondered why everyone was getting so bent out of shape over touching terriers when there were far more serious anti-Islamic practices going on. Khalid told the Malay Mail that there’d been a complete lack of outrage when he pestered the government to put its gambling and alcohol tax revenue into a fund dedicated to infrastructure rather than risk paying civil servants with ‘unclean’ cash. Given the apparent tolerance for such practices, “why the surprise when Malay Muslims hug dogs?”

The Perkasa prognosticators aren’t unique in their ability to know the mind of God and to joyfully discover that His views are in lockstep with their own. Christian televangelist Pat Robertson infamously blamed Hurricane Katrina on America’s tolerance of homosexuality and suggested the 2010 earthquake in Haiti was punishment for the country having signed a “pact to the devil” to rid themselves of their French colonial masters a couple centuries earlier.

The danger of believing in an interventionist deity – one that saves selected individuals in a plane crash or helps wife-beaters score touchdowns – is that you have no answer for why he appears quite often to be intervening on the side of the evildoers. Like the recent grenade attack on an online bookmaker in Kuala Lumpur that not only failed to kill its target but resulted in the death of an innocent valet parking attendant. Somebody up there wants to see Ah Hai carrying on the good work, we guess.