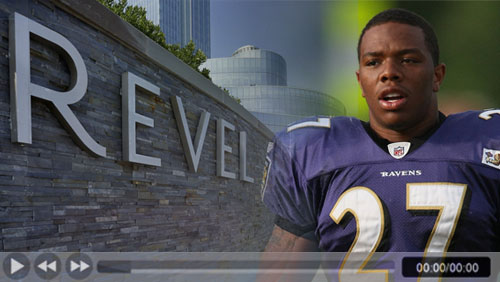 Even from beyond the grave, Revel Hotel and Casino continues to make the wrong kind of headlines.

According to NBC News, senior casino employees of with knowledge of security practices at Revel believe that a casino employee was likely responsible for leaking the video showing former Baltimore Ravens running back Ray Rice brutally assaulting then-fiancé and now-wife Janay Palmer inside an elevator at Revel.

The NBC News source also added that whoever was responsible for leaking the video to TMZ made a recording of the security footage using a phone or a tablet, thus making it impossible to trace the source of the footage. The NFL has maintained that it did not receive any video from Revel or law enforcement authorities despite an Associated Press report indicating that a female league executive received a copy of the tape and saw the footage for herself.

Rice’s domestic abuse case has put a negative spotlight on how the NFL, specifically Commissioner Roger Goodell, has handled the mess. It’s gotten so bad that a handful of sportsbooks have already created props on whether Goodell will still be the league’s commissioner by the time the next season starts. “No” is at 7/10 while a “Yes” meaning he’d still be commissioner this time next year is at 2/1.

Not to be outdone, props on Rice’s future in the NFL have also surfaced. The 27-year old tailback’s odds of returning to the NFL has been priced at 2/3 for “yes” and 6/5 for “no”. Expect these odds to move or taken off the board entirely now that the National Football League Players Association (NFLPA) has gotten involved to have him reinstated.

It’s gotten this nutty for the NFL these days. Rice and Goodell aren’t the only ones that have come under fire in recent weeks. Carolina Panthers defensive end Greg Hardy and San Francisco 49ers defensive end are in the middle of their own domestic abuse cases while Minnesota Vikings star running back Adrian Peterson is trying to fight a child abuse case.

Welcome to the National Football League, ladies and gentlemen!

Could D.K. Metcalf and the Seattle Seahawks shock the NFL?
Paul Seaton
16 hours Ago