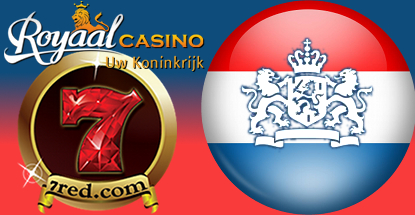 The operators of two online casino sites are in dutch with Dutch gaming regulators for illegally marketing their services to Netherlands-based gamblers. Last week, the Kansspelautoriteit (Dutch Gaming Authority) issued a pair of €130k fines to the operators of 7red.com and RoyaalCasino.com for their ongoing efforts to target Dutch gamblers despite the regulator’s warnings to GTFO.

Fines were issued to two holding companies – Redcorp SA and Bluemay Enterprises NV – whose sites offered a Dutch-language version of their product. The sites switched to English after being duly warned by the Kansspelautoriteit, but the sites’ terms and conditions continued to offer a specific sign-up bonus to Netherlands-based gamblers. The sites had also promoted their services in Dutch via Facebook and ran Dutch-language television adverts on National Geographic and other channels until the regulator informed the broadcasters that the ads weren’t officially sanctioned.

The Netherlands is in the home stretch of instituting a regulated online gambling market and the Kansspelautoriteit has been doing its best to wipe the slate clean before licensed operators are allowed to pimp their wares. Curacao-based Global Stars was fined €100k for unauthorized Dutch operations a year ago, while this spring saw Mansion and ONISAC Ltd. hit with fines of €150k. Last month, the Kansspelautoriteit warned online sportsbooks not to take advantage of the temporary void created by all this operator harassment.

To ensure its regulated online market stands a fighting chance against such rogues, the Kansspelautoriteit has been striking deals with a number of online payment processors to prevent unauthorized gaming sites from being able to move money between themselves and Dutch punters. Among the processors that have agreed to abide by the Kansspelautoriteit’s edicts are Mastercard, Mollie, Dial XS, Sisow, Currence (owner of IDEAL), PaySquare and the banking members of the Dutch Payments Association.