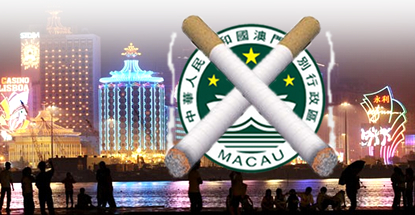 Macau casinos got a boost from Golden Week holiday travelers, but the bump paled in comparison to previous years. Estimates for average daily revenue at Macau casinos during the first five days of Golden Week came to MOP 1b (US $125m), up from MOP 900m during the preceding weeks in September, but nothing like the 30% gains experienced during Golden Week 2013.

The Macau Government Tourist Office (MGTO) reported a 14.4% year-on-year rise in visitor arrivals over the first five days of October. However, that figure includes laborers, students and the like, leading Union Gaming Research analysts to suggest the MGTO’s figure might represent a “false positive,” in that many of these visitors didn’t seem to be making it onto the casino floor. Union Gaming believes mass-market casino foot traffic “likely declined year-on-year during Golden Week.”

And the declines may continue as Macau wrestles with the imposition of its smoking ban. As of midnight on Monday (6), VIP gaming rooms remain smoke-‘em-if-you-got-‘em zones but it’s butts-out on the mass-market floor. As of Monday, just 12 Macau casinos – including Sands China’s Venetian, Sands Macao and Sands Cotai Central, Wynn Macau and Galaxy Entertainment Group’s StarWorld – had installed airport-style smoking lounges on the periphery of their mass-market gaming floors. Smokers in the other casinos face three options: don’t smoke, go outside to smoke or find sufficient cash to gain admittance into a VIP room.

Casinos, which had been walling off their premium-mass areas under the mistaken notion that smoking would be permitted in areas of restricted access, learned otherwise last week, rendering all their work for naught. Macau’s government appears to want to keep a lid on further protests by labor groups, which have been pressing for improved working conditions, including a smoke-free environment for dealers. But the lack of clarity that led operators to believe their premium-mass walls were within the rules isn’t sitting well with some operators.

The full impact of the new smoking law will only become clear with time. Case studies from America showed 20% reductions in gaming revenue following the imposition of smoking bans. But Macau gamblers are far more likely than Americans to be smokers, so the impact could well be much greater as well.

Morgan Stanley estimated mass-market revenue growth will slow from 13% in Q3 to flat growth in Q4 to 5% declines in H1 2015. But Union Gaming suggested the impact could be minimal, citing habits of gamblers who rarely stay at one table longer than 40 minutes, giving them regular breaks in which to get to a designated smoking area and satisfy that nic-fit.

One gambler at SJM Holdings’ flagship Grand Lisboa property – where the smoking lounge is still awaiting approval – begged to differ, telling Macau Business Daily that having to go outside to get that nicotine hit “breaks my luck.” Another smoker didn’t much fancy one of Wynn Macau’s smoking lounges, saying the smoke was too concentrated and “it smells really bad.” You know, almost like an ashtray…