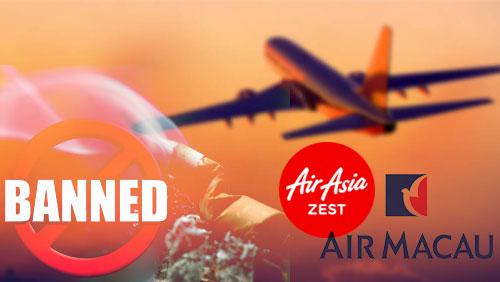 The Macau Health Bureau has released a statement saying that 39 of the 41 casinos and slot parlors in the gambling destination have submitted their draft plans for smoking rooms ahead of the October 6 blanket ban of smoking on mass-market casino floors.

Smoking will not be allowed inside the gaming facilities with the exception of VIP rooms. Dedicated smoking lounges in the common area are expected to be built, improving the quality of the air inside casinos for non-smoking gamblers as well as dealers and casino employees who spend most of their time in the common areas inside the casinos.

Once the ban is put in place, casinos will be required by the Health Bureau to submit a monthly report on the quality of air in their premises.

Meanwhile, Air Macau announced that it is in the process of adding four direct flights a week to Tianjin, China beginning September 6. The Macau International Airport reports that a separate airline will offer two weekly flights to Phnom Penh, Cambodia. These new flights are tipped to boost gambling revenue in Macau.

Last month, Macau International Airport welcomed 520,000 passengers, a 6.5% improvement from its numbers a year ago. Mainland China still accounts for a majority of visitors going to Macau but there’s still enough room for more visitors to visit the Chinese territory if more transportation options become available.

On the other hand, AirAsia Zest won’t be making as many trips to Macau from the Philippines. According to a report from the Business Daily, the Tony Fernandes-controlled budget airline is reverting to its three-flights-a-week schedule between Macau and Manila as part of the carrier’s network adjustment, with AirAsia Zest launching more domestic and regional flights.

“It was during this period when we added new flights to Incheon [South Korea], increased our domestic routes and are now looking at opening direct flights to China from Kalibo, gateway to the popular island resort of Boracay aside from our daily Manila-Shanghai route… China is an important market for us to grow and expand,” Joy Cañeba, CEO of AirAsia Zest, told the news site.

Back in July, AirAsia Zest began offering flights to Macau on a daily schedule in response to what Cañeba described as “increasing demand”.