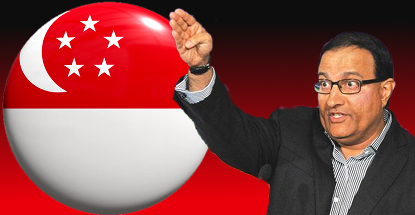 Singapore’s remote gambling bill passed its second reading in Parliament on Tuesday, despite spirited opposition from a group of lawmakers who say the bill’s restrictions don’t go far enough.

The bill, introduced in September, would restrict online gambling to those operators licensed by the state. License eligibility would be limited to Singapore-based operators who contribute a portion of their proceeds to local charitable and/or social causes. The bill also calls for punitive measures against operators of sites not holding a Singapore license, as well as anyone acting as an agent or other promotional capacity for such sites, and even for these sites’ customers.

Second Minister for Home Affairs S. Iswaran (pictured) told Parliament the bill would keep a tight lid on the types of betting licensed operators would be able to offer. Casino-style games and poker were singled out as examples of betting that won’t be tolerated. But Iswaran downplayed fears that the bill’s broad language would restrict Singaporeans’ ability to play online social games, saying such games would not fall within the bill’s scope so long as players “cannot convert in-game credits or tokens for money or real merchandise outside the game.”

Parliamentary critics suggested the government was sending a mixed message by allowing exemptions to the remote gambling ban. Companies like the Singapore Pools sports betting monopoly and its pari-mutuel race betting equivalent Turf Club are expected to apply for new remote gambling licenses. Singapore Pools currently allows remote betting only via telephone while the Turf Club permits wagering via smartphones.

Iswaran referenced both companies as evidence that Singapore knew what it was doing by granting limited exemptions to gambling prohibitions. Iswaran said the bill was introduced “not because we wish to promote it or condone” remote gambling but to maintain “an ecosystem that minimizes the law and order concerns and social consequences.”

Chan Chun Sing, Minister for Social and Family Development, followed up on this point, saying the exemptions for select operators would allow the authorities to monitor player behavior to mitigate potential harms of remote gambling. Chan said it wasn’t so much a question of whether to ban or not ban but determining “the best way for us to manage this very difficult problem.”

ENTRY LEVY EXTENSION CONCERNS
Meanwhile, Deputy Prime Minister and Minister for Home Affairs Teo Chee Hean has revealed some statistics on how local residents were utilizing the brick-and-mortar casino levy system. Singapore’s two casinos charge local gamblers a S$100 entry levy that is valid for 24 hours. The model has been widely cited by other Asia-Pacific jurisdictions seeking to liberalize their gambling laws as the best way to mitigate the potential social harms of casino gambling.

In response to a question from a fellow parliamentarian, Teo said 8% of all daily entry levies were purchased by Singaporeans looking to extend their casino stay by an additional 24 hours. Teo cautioned that this didn’t automatically mean all 8% had been gambling at the casino for 24 hours non-stop, as the levies permit gamblers to enter and exit the casino at their leisure during that 24-hour window. Teo said the government would continue to monitor levy usage but has no current plans to revise the laws to prohibit such extensions.